Hylaeus agilis, commonly known as the Agile masked bee, is a bee species in the family Colletidae. It is endemic to New Zealand. This species is found throughout the country and visits the flowers of a wide variety of plant species, both native and introduced.

This species was first described by Frederick Smith in 1876 under the name Prosopis agilis. The holotype specimen of this species is held at the Natural History Museum, London.

H. agilis are slender and mainly black in colour, with distinctive yellow or white markings on their face. They have sparse hairs and range in size from 7-9mm. Like all Hylaeus bees they lack pollen-carrying hairs (scopa), and resemble wasps.

H. agilis is endemic to New Zealand and found on the North, South and Stewart Islands as well as on Three Kings Island. H. agilis is predominantly located in vegetated areas from sea level to 1590m of elevation. 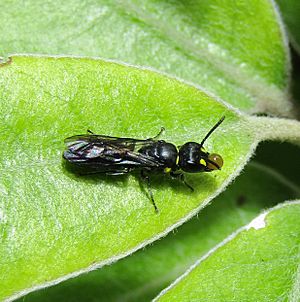 Because H. agilis has no specialized pollen-carrying structures on its body, pollen is carried in a crop. This internal pollen is regurgitated for larval food. Like most bee species endemic to New Zealand, they are solitary mining bees but instead of constructing or excavating their own nests, they live in blind tunnels in branches and twigs, or in abandoned beetle holes in logs.

All content from Kiddle encyclopedia articles (including the article images and facts) can be freely used under Attribution-ShareAlike license, unless stated otherwise. Cite this article:
Hylaeus agilis Facts for Kids. Kiddle Encyclopedia.