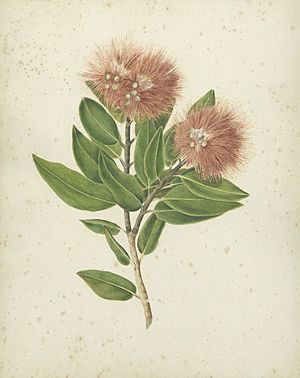 Metrosideros excelsa, with common names pohutukawa (Māori: pōhutukawa), New Zealand Christmas tree, New Zealand Christmas bush, and iron tree, is a coastal evergreen tree in the myrtle family, Myrtaceae, that produces a brilliant display of red (or occasionally orange, yellow or white) flowers made up of a mass of stamens. The pohutukawa is one of twelve Metrosideros species endemic to New Zealand. Renowned for its vibrant colour and its ability to survive even perched on rocky, precarious cliffs, it has found an important place in New Zealand culture for its strength and beauty, and is regarded as a chiefly tree (rākau rangatira) by Māori. The blossom of the tree is called kahika.

The generic name Metrosideros derives from the Ancient Greek metra or "heartwood" and sideron or "iron". The species name excelsa is from Latin excelsus, "highest, sublime". Pōhutukawa is a Māori word. Its closest equivalent in other Polynesian languages is the Cook Island Māori word po'utukava, referring to a coastal shrub with white berries, Sophora tomentosa. The -hutu- part of the word comes from *futu, the Polynesian name for the fish-poison tree (Barringtonia asiatica), which has flowers similar to those of the pohutukawa. 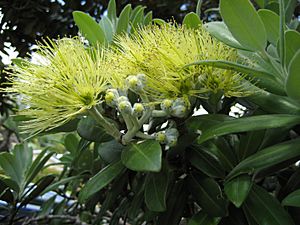 The pohutukawa grows up to 25 metres (82 ft) high, with a spreading, dome-like form. It usually grows as a multi-trunked spreading tree. Its trunks and branches are sometimes festooned with matted, fibrous aerial roots. The oblong, leathery leaves are covered in dense white hairs underneath.

The tree flowers from November to January with a peak in early summer (mid to late December), with brilliant crimson flowers covering the tree, hence the nickname New Zealand Christmas tree. There is variation between individual trees in the timing of flowering, and in the shade and brightness of the flowers. In isolated populations genetic drift has resulted in local variation: many of the trees growing around the Rotorua lakes produce pink-shaded flowers, and the yellow-flowered cultivar 'Aurea' descends from a pair discovered in 1940 on Mōtiti Island in the Bay of Plenty. 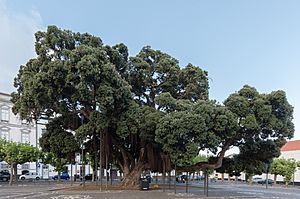 The natural range of the pohutukawa is the coastal regions of the North Island of New Zealand, north of a line stretching from New Plymouth (39° S) to Gisborne (38° S), where it once formed a continuous coastal fringe. By the 1990s, pastoral farming and introduced pests had reduced pohutukawa forests by over 90%. It also occurs naturally on the shores of lakes in the Rotorua area and in Abel Tasman National Park at the top of South Island.

The tree is renowned as a cliff-dweller, able to maintain a hold in precarious, near-vertical situations. Like its Hawaiian relative the ʻōhiʻa lehua (M. polymorpha), the pohutukawa has shown itself to be efficient in the colonisation of lava plains – notably on Rangitoto, a volcanic island in the Hauraki Gulf.

A giant pohutukawa at Te Araroa on the East Coast is reputed to be the largest in the country, with a height of 20 metres and a spread of 38 metres (125 ft).

A pohutukawa tree with an estimated age of 180 years known as 'Te Hā,' is fully established at an Auckland City park. 'Te Hā' is the largest urban specimen in the country. Plans to build a monument in honour of victims of the Erebus Disaster in proximity to the tree activated significant local opposition in 2021. 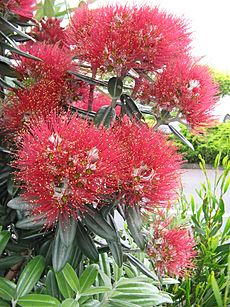 In New Zealand, the pohutukawa is under threat from browsing by the introduced common brushtail possum which strips the tree of its leaves. A charitable conservation trust, Project Crimson, has the aim of reversing the decline of pohutukawa and other Metrosideros species – its mission statement is "to enable pohutukawa and rata to flourish again in their natural habitat as icons in the hearts and minds of all New Zealanders".

Pohutukawa wood is dense, strong and highly figured. Māori used it for beaters and other small, heavy items. It was frequently used in shipbuilding, since the naturally curvy shapes made strong knees. Extracts are used in traditional Māori healing for the treatment of diarrhoea, dysentery, sore throat and wounds.

The pohutukawa is popular in cultivation, and there are fine examples in most North Island coastal cities. Vigorous and easy to grow, the tree flourishes well south of its natural range, and has naturalised in the Wellington area and in the north of the South Island. It has also naturalised on Norfolk Island to the north. The pohutukawa has been introduced to other countries with mild-to-warm climates, including south-eastern Australia, where it is naturalising on coastal cliffs near Sydney. In coastal California, it is a popular street and lawn tree, but has caused concern in San Francisco where its root systems are blamed for destroying sewer lines and sidewalks. In parts of South Africa, the pohutukawa grows so well that it is regarded as an invasive species. The Spanish city of A Coruña has adopted the pohutukawa as a floral emblem.

At least 39 cultivars of pohutukawa have been released. Duncan & Davies nurseries were a leading force in the mid-20th century, while Graeme Platt has been responsible for 16 different cultivars so far, including a rare white-flowering tree. Cultivars include:

All content from Kiddle encyclopedia articles (including the article images and facts) can be freely used under Attribution-ShareAlike license, unless stated otherwise. Cite this article:
Metrosideros excelsa Facts for Kids. Kiddle Encyclopedia.