Carmichaelia (New Zealand brooms) is a genus of 24 plant species belonging to Fabaceae, the legume family. All but one species are native to New Zealand; the exception, Carmichaelia exsul, is native to Lord Howe Island and presumably dispersed there from New Zealand.

Carmichaelia ranges in form from trees to prostrate species a few centimetres high. Mature plants are usually leafless, their leaves replaced by stipules which have fused into scales.

Carmichaelia species are found throughout New Zealand, although the eastern South Island has 15 species endemic to it. Most species have a restricted range within New Zealand. They colonise disturbed ground in shallow, poor soils, drought- and frost-prone areas, and alluvial soils.

The New Zealand brooms are not closely related to the European common broom Cytisus scoparius. Common broom has been introduced to New Zealand, where it is sometimes known as Scotch broom to distinguish it from native species and is classed as a noxious weed because of its invasiveness. 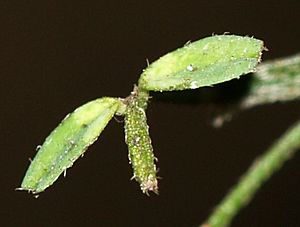 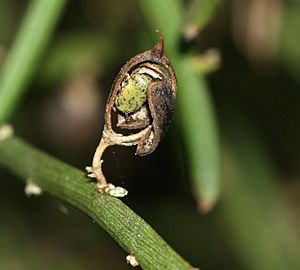 All content from Kiddle encyclopedia articles (including the article images and facts) can be freely used under Attribution-ShareAlike license, unless stated otherwise. Cite this article:
Carmichaelia Facts for Kids. Kiddle Encyclopedia.