Hysham is a town in and the county seat of Treasure County, Montana, United States. The population was 276 at the 2020 census.

It is bordered to the north by the Yellowstone River. The surrounding area is composed of rolling hills and farmland.

When the Montana Territory became the state of Montana in 1889 the future site of Hysham was just a blank spot in the rolling prairie along the Yellowstone River. At that time, the area was within sprawling Custer County, which covered much of eastern Montana, and also included the eastern part of the Crow Indian Reservation. The area was opened up to homesteading in 1906 after the federal government moved the Crow Indian Reservation boundary further west to its present location. This made possible the development of farms and ranches throughout the area and at the same time allowed the settlement of small towns like Hysham (Cheney 1984).

The location and founding of the town of Hysham is intertwined with its ranching and railroad history. A large cattle ranch, the Flying E, ran thousands of heads of cattle in the region. Charlie J. Hysham had moved from the town of Red Oak, Iowa, to manage the ranch. In order to facilitate the delivery of the large amounts of supplies the Flying E ranch required, the Northern Pacific Railroad built a siding to unload goods and materials that Hysham had ordered from Billings and Forsyth. In 1907, the siding became the nucleus for the town of Hysham. (Cheney 1984; Kimball 1976).

James O. Lockard built the first building on the future site of Hysham shortly after the area was open to homesteading. Later, his homestead south of the railroad tracks would become the "Lockard Addition" in Hysham. The general store was located north of the railroad tracks and also served as Hysham’s first post office with Lockard appointed the first postmaster. Hysham slowly grew by a general process typical throughout the frontier where an initial commercial or transportation need would establish the site, which would then grow as settlers homesteaded nearby. This would, in turn, resulted in the need for other commercial enterprises followed by schools, churches, banks, government and other civic institutions (Cheney 1984; Kimball 1976; Sanborn 1920).

In 1906 there were two stores, a lumber yard and a blacksmith shop. The first school at the growing community was built in 1908. Ada Channel, who had a homestead near the railroad siding, became the school's first teacher. She was also a key figure in the formation of Hysham. This same year, she worked to locate a town site with the help of James Lockard and F. L. Baker. The three town founders plotted town lots on 40 acres (160,000 m2) of Channel's homestead. E. C. Sampson completed the process with a survey, which established the town's streets. Two other additions were added later. The First Addition added 40 acres (160,000 m2) south of the original site and the Rogers Addition was established north of the railroad depot. Even though Charlie Hysham had moved away from the area by this time, the new town was named Hysham in his honor. The town was officially incorporated in 1916 (Sanborn 1920: Kimball 1976; Cheney 1984).

As more families were attracted to the area, more businesses were established. Town mayor, James Lyndes, the started a real estate business with C. M. Patterson and opened a law office. He served as the first County Attorney and Hysham’s first Mayor. Lyndes' wife Mary Alice served as chairman of the school board and for the first few years, the high school was held above the Lyndes and Patterson store. Also among the first town's residents were F. L. and Christiania Baker. Baker owned a threshing machine and did custom threshing (Kimball 1976).

Another phase of the community development process usually occurred after the initial settlers became established and then encouraged friends and relatives to move to the area. Such was the case with the Lyndes family. After James Lyndes set up his law and real estate business, four of his brothers: Bert, Wallace, Elmer and C. W. "Kid" and their families, became some of the earliest Hysham residents (Kimball 1976).

With the growth of commercial and agricultural businesses came the need for banks to finance the economic growth. The first bank in Hysham was the First National Bank, established in 1910, with J. W. Wagner serving as president. The bank continued to serve the community for more than half a century. Five years later, C. C. Jordan gambled on the boom caused by World War I and opened the Treasure State Bank. However, this bank was not as fortunate as its predecessor and ran into hard times with the post-war recession and a brutal winter in 1919, which severely damaged many of the area's cattle ranches. It was forced to close in 1922, which further hurt many local ranchers who had invested heavily in the bank (Kimball 1976).

For the most part, however, the 1910s were a period of prosperity. Hysham boasted of concrete sidewalks with modern infrastructure including electric lights, telephone, water, and sewer. New businesses included an International Harvester dealership, a drug store, a hotel, the Pin-Con confections and ice cream parlor, a hardware business, a grocery store, the Rosebud Flour mill, a grain elevator, a butcher shop, a bakery, the Hysham Echo newspaper, a barber shop and pool hall as well as other enterprises. Besides new businesses, the decade saw the establishment of many social institutions such as the Hysham Community Church, the Presbyterian Church, the Hysham School, the Hysham Women's Club and the Buffington Hall, which was used for dances, basketball games, community meetings and other programs until it burned down in 1939 (Kimball 1976; Cheney 1984).

Another development, which occurred during the 1910s, was the improvement of the area's road system. In 1914, the Montana State Highway Commission placed the "Yellowstone Trail" county road between Custer and Hysham on the Federal-Aid highway system. The road eventually followed a county road that ran just south of the Yellowstone River, crossing it over the Myers Bridge, which was a multi-span steel through truss span built in 1907. Other roads were either constructed or improved during this period (Axline 1991). 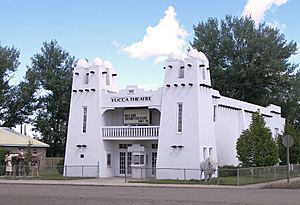 The Yucca Theatre. The building was added to the National Register of Historic Places on January 7, 1994.

Symbolic of this perseverance in the face of adversity, was the construction of the Yucca Theatre in 1931 by local businessman and politician, David M. Manning and his brother Jim Manning, just when the nationwide depression was at its nadir. This striking building is in the Mission style, which may have been the result of Manning's time spent in the Southwest where he would have seen similar buildings. However, it was unique to the Hysham area and undoubtedly was a source of civic pride to the community and does to this day show movies every Sunday. (U.S. Department of Interior 1993).

Manning went on to become the owner or part owner of five different businesses; he helped build the city swimming pool and city water system; he built two dams in the Hysham area and improved the irrigation system. In addition to his many projects and businesses in Hysham, he also served in the Montana legislature where he was instrumental in promoting rural electrification and highway construction (U.S. Department of Interior 1993). After 52 continuous years of service (1933–1985), he retired as Dean of the Montana Senate and senior state legislator in the nation (Andrea Merrill-Maker, Montana Almanac, p. 159).

There were 145 households, of which 20.7% had children under the age of 18 living with them, 55.9% were married couples living together, 3.4% had a female householder with no husband present, 5.5% had a male householder with no wife present, and 35.2% were non-families. 33.1% of all households were made up of individuals, and 15.9% had someone living alone who was 65 years of age or older. The average household size was 2.15 and the average family size was 2.69.

All content from Kiddle encyclopedia articles (including the article images and facts) can be freely used under Attribution-ShareAlike license, unless stated otherwise. Cite this article:
Hysham, Montana Facts for Kids. Kiddle Encyclopedia.