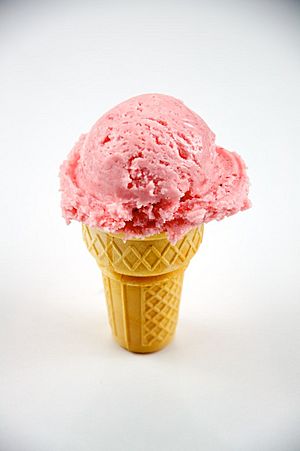 An ice cream cone, poke (Ireland and Scotland) or cornet is a dry, cone-shaped pastry, usually made of a wafer similar in texture to a waffle, which enables ice cream to be held in the hand and eaten without a bowl or spoon. Various types of ice cream cones include wafer (or cake) cones, waffle cones, and sugar cones.

Many styles of cones are made, including pretzel cones and chocolate-coated cones. A variety of double wafer cone exists that allows two scoops of ice cream to be served side by side. Wafer cones are often made with a flat bottom instead of a pointed, conical shape, enabling the ice cream and "cone" to stand upright on a surface without support. These types of wafer cones are often branded as "cups". 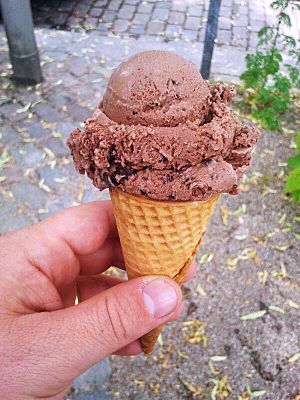 Edible cones were mentioned in French cooking books as early as 1825. In 1904, at the St. Louis World's Fair a Syrian concessionaire had his waffle booth next to an ice cream vendor who ran short of dishes. Hamwi rolled a waffle to contain the ice cream.

At the age of 16 Doumar proceeded to roll up the waffle and place a scoop of ice cream on top. He then began selling the cones at the St. Louis Exposition. His "cones" were such a success that he designed a four-iron baking machine and had a foundry make it for him. At the Jamestown Exposition in 1907, he and his brothers sold nearly twenty-three thousand cones. After that, Abe bought a semiautomatic 36-iron machine, which produced 20 cones per minute and opened Doumar's Drive In in Norfolk, Virginia, which still operates at the same location over 100 years later.

The earliest cones were rolled by hand, from hot and thin wafers, but in 1912, Frederick Bruckman, an inventor from Portland, Oregon, patented a machine for rolling ice cream cones. He sold his company to Nabisco in 1928, which is still producing ice cream cones as of 2017. Independent ice-cream providers such as Ben & Jerry's make their own cones.

The Joy Ice Cream Cone Company, located in Hermitage, PA, was founded in 1918 and began to mass-produce baked ice cream cones to sell to restaurants, as well as the everyday consumer. The company produces over 2 billion ice cream cones (sugar, cake, and waffle cones) a year. It is said that the company is the largest ice cream cone maker in the world as of 2009.

All content from Kiddle encyclopedia articles (including the article images and facts) can be freely used under Attribution-ShareAlike license, unless stated otherwise. Cite this article:
Ice cream cone Facts for Kids. Kiddle Encyclopedia.