The Modern Cook facts for kids

The Modern Cook was the first cookery book by the Anglo-Italian cook Charles Elmé Francatelli (1805–1876). It was first published in 1846. It was popular for half a century in the Victorian era, running through 29 London editions by 1896. It was also published in America.

The book offered elaborate dishes, described with French terminology such as bisque, entrées, entremets, vol-au-vent, timbale and soufflé. It included bills of fare for meals for up to 300 people, and for a series of eight- or nine-course dinners served to Queen Victoria; one exceptional royal dinner in 1841 had sixteen entrées and sixteen entremets, including truffles in Champagne.

The Modern Cook was the first to mention filling wafer cones with ice cream. The book, written for upper middle-class housewives, is illustrated with 60 engravings, often showing how to present carefully decorated centrepiece dishes such as "Salmon à la Chambord" for large dinner parties.

The book influenced households in Britain and America to aspire to more complex, French-style dinners in imitation of the Queen, and resulted in a change in eating habits, including the modern two-course approach for both lunch and dinner.

Charles Elmé Francatelli, from an Italian family, was born in London in 1805, and learnt cookery in France. Coming to England, he worked for various aristocrats before becoming chief chef of Crockford's club and then chief cook to Queen Victoria in 1840. He went on to work at Crockford's again, at the Coventry House and Reform Clubs, St James's Hotel, and for the Prince and Princess of Wales. This made him a celebrity cook of his time. 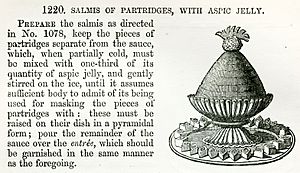 "Salmis of Partridges with Aspic Jelly"

Apart from the preface and Francatelli's advice on serving wine, the body of the book consists almost entirely of recipes without any kind of introduction. There is no guidance on choice of kitchenware or advice on the layout of the kitchen.

The recipes are presented entirely as instructions, generally without illustration. Quantities, where stated, are incorporated in the text; ingredients are never listed explicitly. Quantities are sometimes named, as in the "Cream Bechamel Sauce", which begins "Put six ounces of fresh butter into a middle-sized stewpan; add four ounces of sifted flour, some nutmeg, a few peppercorns, and a little salt;". In other cases only the relative proportions are indicated, as for the "Salmis of Partridges with Aspic Jelly", where the only hint of quantity in the recipe is "must be mixed with one-third of its quantity of aspic jelly". This recipe also indicates the style of cross-referencing, with the starting instruction "Prepare the salmis as directed in No. 1078". 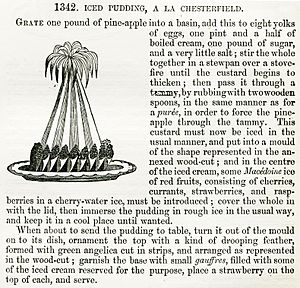 The Modern Cook is the first published record in England of filling wafer cornets, which Francatelli called gauffres, with ice cream. He used them to garnish his iced puddings.

The following apply to the 28th edition of 1886. The table of contents did not have page numbers. 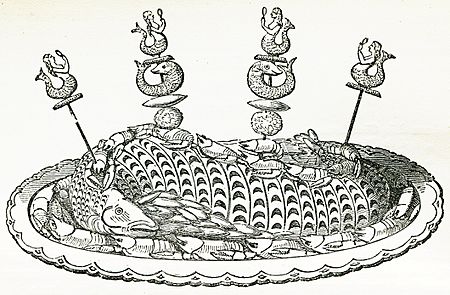 The 28th edition is illustrated with 60, mostly small, engravings. There is a full-page frontispiece of the author, drawn by Auguste Hervieu and engraved by Samuel Freeman (1773–1857). Freeman is known for working mainly in stipple, and the portrait here is no exception.

All the other engravings are of completed dishes, showing the serving-plate with the food arranged on it and often elaborately garnished. The artists and engravers of the food illustrations are not identified. 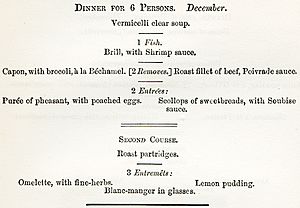 A Bill of Fare for a dinner for 6 persons

Francatelli provides "A Series of Bills of Fare for Every Month Throughout the Year", including dinners variously for 6, 8, 10, 12, 14 16, 18, 20, 24, 28 and 36 persons (though not all of these in every month). The bills of fare for dinners for 6 persons thus represent the simplest menus in the book. All the dinners are divided into a first and a second "Course", but each course was divided in turn into three or four servings, in most cases with a choice of two or more dishes. Thus there might be one or two soups, two fishes, two "removes" of meat, and two savoury "entrées" in the first "Course", with a second "Course" of one kind of game, followed by a choice of three "entremets" which included both savouries, generally vegetables, and desserts.

There is a single bill of fare for a "Ball Supper for 300 Persons", and one for a "Public Dinner" for the same number. 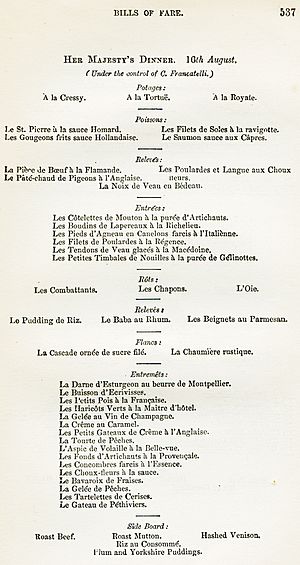 There are 13 bills of fare for "Her Majesty's Dinner", each with an exact date in 1841 and the words "(Under the control of C. Francatelli.)". Each of the royal dinners has either eight or nine courses (including a buffet or sideboard), except for that of 30 June which is divided into two "Services" and has 11 courses.

The royal dinners are described almost entirely in French, with the exception of the heading, the phrase "Side Board", and a few specifically British dishes such as "Roast Mutton" and "Haunch of Venison". There are usually two soups, two fishes, two removes, six entrées, two roasts, two more removes, six entremets, and between two and seven dishes on the sideboard. The exceptional royal dinner of 30 June 1841 had sixteen entrées and sixteen entremets. Some of these entremets used the most costly ingredients, including truffles in Champagne.

The Modern Cook was first published in 1846. It reached its 29th edition in 1896. Francatelli presented a copy of the 8th edition to Queen Victoria on 4 June 1853.

All content from Kiddle encyclopedia articles (including the article images and facts) can be freely used under Attribution-ShareAlike license, unless stated otherwise. Cite this article:
The Modern Cook Facts for Kids. Kiddle Encyclopedia.