If a tree falls in a forest facts for kids

Kids Encyclopedia Facts
For the 2011 documentary, see If a Tree Falls: A Story of the Earth Liberation Front. 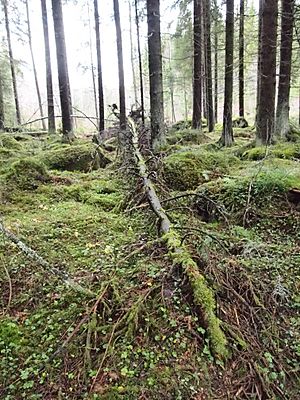 A fallen tree in a forest

"If a tree falls in a forest and no one is around to hear it, does it make a sound?" is a philosophical thought experiment that raises questions regarding observation and perception.

The possibility of unperceived existence

Can something exist without being perceived by consciousness? – e.g. "is sound only sound if a person hears it?" The most immediate philosophical topic that the riddle introduces involves the existence of the tree (and the sound it produces) outside of human perception. If no one is around to see, hear, touch or smell the tree, how could it be said to exist? What is it to say that it exists when such an existence is unknown? Of course, from a scientific viewpoint, it exists. It is human beings that are able to perceive it. George Berkeley in the 18th century developed subjective idealism, a metaphysical theory to respond to these questions, coined famously as "to be is to be perceived". Today meta-physicists are split. According to substance theory, a substance is distinct from its properties, while according to bundle theory, an object is merely its sense data. The definition of sound, simplified, is a hearable noise. The tree will make a sound, even if nobody heard it, because it could have been heard.

The answer to this question depends on the definition of sound. Since sound does not exist without our hearing of it, sound does not exist if we do not hear it. However, when a tree falls, the motion disturbs the air and sends off air waves. This physical phenomenon which can be measured by instruments other than our ears exists regardless of human perception (seeing or hearing ) of it. Putting together, although the tree falling on the island sends off air waves, it does not produce sound if no human is within the distance where the air waves are strong enough for a human to perceive them.

Knowledge of the unobserved world

Can we assume the unobserved world functions the same as the observed world? – e.g., "does observation affect outcome?"
A similar question does not involve whether or not an unobserved event occurs predictably, like it occurs when it is observed. The anthropic principle suggests that the observer, just in its existence, may impose on the reality observed. However, most people, as well as scientists, assume that the observer doesn't change whether the tree-fall causes a sound or not, but this is an impossible claim to prove. However, many scientists would argue that a truly unobserved event is one which realises no effect (imparts no information) on any other (where 'other' might be e.g., human, sound-recorder or rock), it therefore can have no legacy in the present (or ongoing) wider physical universe. It may then be recognized that the unobserved event was absolutely identical to an event which did not occur at all. Of course, the fact that the tree is known to have changed state from 'upright' to 'fallen' implies that the event must be observed to ask the question at all – even if only by the supposed deaf onlooker. The British philosopher of science Roy Bhaskar, credited with developing critical realism has argued, in apparent reference to this riddle, that:

If men ceased to exist sound would continue to travel and heavy bodies to fall to the earth in exactly the same way, though ex hypothesi there would be no-one to know it

This existence of an unobserved real is integral to Bhaskar's ontology, which contends (in opposition to the various strains of positivism which have dominated both natural and social science in the twentieth century) that 'real structures exist independently of and are often out of phase with the actual patterns of events'. In social science, this has made his approach popular amongst contemporary Marxists — notably Alex Callinicos – who postulate the existence of real social forces and structures which might not always be observable.

The dissimilarity between sensation and reality

What is the difference between what something is, and how it appears? – e.g., "sound is the variation of pressure that propagates through matter as a wave"
Perhaps the most important topic the riddle offers is the division between perception of an object and how an object really is. If a tree exists outside of perception then there is no way for us to know that the tree exists. So then, what do we mean by 'existence', what is the difference between perception and reality? Also, people may also say, if the tree exists outside of perception (as common sense would dictate), then it will produce sound waves. However, these sound waves will not actually sound like anything. Sound as it is mechanically understood will occur, but sound as it is understood by sensation will not occur. So then, how is it known that 'sound as it is mechanically understood' will occur if that sound is not perceived?

All content from Kiddle encyclopedia articles (including the article images and facts) can be freely used under Attribution-ShareAlike license, unless stated otherwise. Cite this article:
If a tree falls in a forest Facts for Kids. Kiddle Encyclopedia.