The Immaculate Conception Church, known colloquially as Palmer Road Church is a 19th-century Roman Catholic church located in Palmer Road, Prince Edward Island, Canada. The church is a white wooden Gothic architecture, and it was constructed in 1892.

As of 2014, the church offers Saturday, Sunday and weekday services, and serves Palmer Road, St. Louis, Miminegash, Pleasant View, Skinner's Pond, southern Harper Road and other communities. The church is located at the intersection of Routes 155 and 156, across from the Palmer Road Community Center. 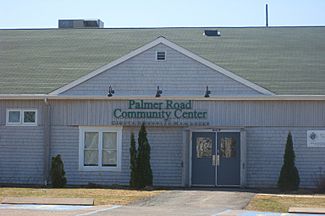 In 1890, the original church burned down, and was replaced by the now-existing church in 1892. Designed by Francois Xavier Edouard Meloche (1855-1917) to replace the original, much smaller mission which was destroyed by fire on May 24, 1890, the cornerstone was laid August 15, 1892 on The Feast of the Acadians.

The church is a wooden Gothic structure, and is the oldest wooden church on Prince Edward Island. The lovely church, so little known to Islanders in general, is an architectural gem of considerable importance, not only to the island, but to Canada as a whole. This is so not only because of its fine design and craftmanship, both inside and out, but also because of its association with Francois Xavier Meloche, an artist/architect who has yet to take his proper place in the annals of Canadian art.

All content from Kiddle encyclopedia articles (including the article images and facts) can be freely used under Attribution-ShareAlike license, unless stated otherwise. Cite this article:
Immaculate Conception Church (Palmer Road) Facts for Kids. Kiddle Encyclopedia.