This article is about the mythical creature. For other uses see imp. 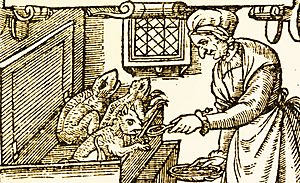 An imp is a mythological creature similar to a fairy or demon, usually described in folklore and superstition.

Imps were the common name given to familiar spirits that served witches in the Middle Ages. Imps were usually kept inside artifacts such as gemstone pieces or vials and summoned for service with magic.

All content from Kiddle encyclopedia articles (including the article images and facts) can be freely used under Attribution-ShareAlike license, unless stated otherwise. Cite this article:
Imp Facts for Kids. Kiddle Encyclopedia.