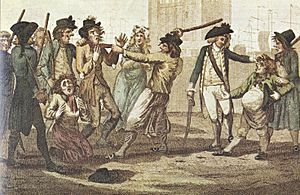 Impressment (the Press) was the act of forcing men to serve in the navy. The people who were "pressed" to join the navy were usually young men. A naval officer would lead a press gang and force men onto warships where they were made to serve as sailors. Their families (if they had families) seldom knew where they had been taken.

This was a normal practice in the Royal Navy during the 17th, 18th and early 19th centuries. Many people said that it should be stopped, but the Navy said it was a good way to get sailors who were needed to defend their country. After the Napoleonic Wars the need for sailors was less and the Navy stopped impressing them.

All content from Kiddle encyclopedia articles (including the article images and facts) can be freely used under Attribution-ShareAlike license, unless stated otherwise. Cite this article:
Impressment Facts for Kids. Kiddle Encyclopedia.