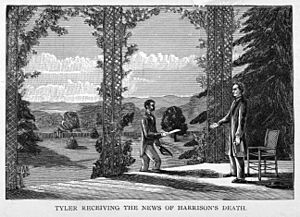 A cartoon showing Tyler receiving the news of Harrison's death

The inauguration of John Tyler as the tenth President of the United States took place in Tyler's bedroom on Thursday, April 6, 1841.

It happened two days after the death of President William Henry Harrison. The inauguration was the beginning of Tyler's only term as President. It was the first time that an inauguration was held because of a president's death.

The swearing-in was done by Chief Judge of the local U.S. Circuit Court, William Cranch, at Brown's Hotel in Washington, D.C.

All content from Kiddle encyclopedia articles (including the article images and facts) can be freely used under Attribution-ShareAlike license, unless stated otherwise. Cite this article:
Inauguration of John Tyler Facts for Kids. Kiddle Encyclopedia.