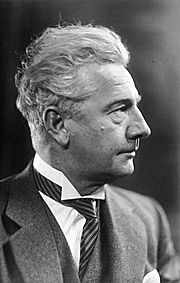 The Independence Party (Icelandic: Sjálfstæðisflokkurinn) is a centre-right political party in Iceland. They are liberal conservatives who are eurosceptic (meaning they don't want Iceland to join the European Union). The party is the one of the largest in Iceland. It is currently tied with the most seats in the Althing. The chairman of the party is Bjarni Benediktsson and vice chairman is Ólöf Nordal.

The party was formed in 1929 as a result of two parties merging. The newly formed party wanted Iceland to be independent. This was later achieved in 1944. From 1929 to 2009, the Independence Party was the dominant party in the Althing.

The party is economically liberal, and is against getting involved with other countries problems. The party is mainly supported by fishermen and high-earners, particularly in Reykjavík. The party also wants Iceland to join the North Atlantic Treaty Organization (NATO).

All content from Kiddle encyclopedia articles (including the article images and facts) can be freely used under Attribution-ShareAlike license, unless stated otherwise. Cite this article:
Independence Party (Iceland) Facts for Kids. Kiddle Encyclopedia.