Position is a way to explain where something is. Position can also mean other things: 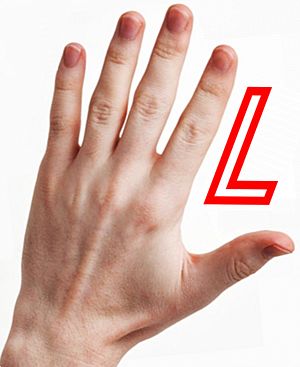 To find which is your left hand side, hold your hands palms down, point your index fingers and stick your thumbs out at right angles. The finger and thumb of your left hand will form a capital letter L.

If the letter L you make is reversed, you found your right hand. Left and right are called opposite sides.

Middle is between up and down and is between left and right. Middle means the same as center.

Far means that something is a long way away from you. Near means it is close to you. Things can also be near and far other persons and other things.

In many sports, the term "position" is used to show what occupation a person has on their team. For example, in baseball, positions include catcher, shortstop and pitcher.

In math and physics 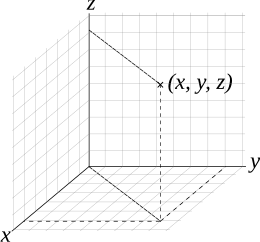 The position of a balloon at a certain time

The position of something is where that thing is in space and time. Usually people use Cartesian coordinates to write down a position. So a scientist might say that the balloon was at x, y, z when it popped at a certain time.

The position of a person is his status or responsibility in a community or group of people. It is called rank in the army. In a factory the manager is a typical position.

All content from Kiddle encyclopedia articles (including the article images and facts) can be freely used under Attribution-ShareAlike license, unless stated otherwise. Cite this article:
Position Facts for Kids. Kiddle Encyclopedia.