The Ingham County Courthouse is an historic government building located at 315 South Jefferson Street in Mason, Ingham County, Michigan. It occupies an entire city block bounded by South Jefferson, East Ash, South Barnes and East Maple Street. Constructed from 1902 to 1904, it is Ingham County's third courthouse and the second on this block, which is directly north of the site of the first courthouse. Designed by noted Lansing architect Edwyn A. Bowd in the Beaux Arts style of architecture, it was built by George W. Rickman and Sons Company of Kalamazoo.

Today building is still used as the Ingham County Courthouse, although much of its original functions are conducted at the Veterans Memorial Courthouse at 313 West Kalamazoo Street and at other locations in Lansing, the county's largest city as well as the capital of Michigan. 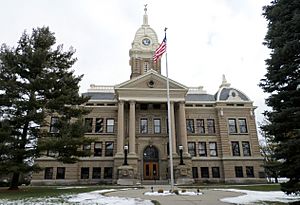 The courthouse in January 2016

All content from Kiddle encyclopedia articles (including the article images and facts) can be freely used under Attribution-ShareAlike license, unless stated otherwise. Cite this article:
Ingham County Courthouse Facts for Kids. Kiddle Encyclopedia.