In 1836 Charles Noble knew that Michigan would be seeking a central location for a new capital when it became a state. He purchased an area of forest, cleared 20 acres (81,000 m2), and founded Mason Center. The "Center" was soon dropped. In 1847, however, the state chose Lansing Township 12 miles (19 km) northward to be its capital due to its potential for water power. Noble managed to make Mason the county seat instead. Ingham County's first downtown courthouse was built in 1843, and was replaced in 1858, and then again in 1905.

In 1865, Mason was incorporated as a village; in 1875 the town became a city. In the 1800s, Mason was the center of Ingham County activity, even more than was Lansing, the state capital. In 1877, Lansing attempted to take the status of county seat for itself, but the two cities made an agreement that moved some county offices and courts to Lansing in exchange for Mason remaining the county seat. As a result, Michigan is the only state in the country with a capital city that is not also a county seat.

Up into the early 1900s, the local Ojibwa tribe had a visible presence in the town. In the 1900s, The Wyeth Corporation began producing baby formula in Mason, but that was discontinued in the 1990s. Today, it is home to the headquarters of Dart Container Corporation. Michigan Packaging Company, Lear Corporation, Gestamp Hardtech, and Ingham Intermediate School District also have facilities in the Mason area. Cattle can still be seen grazing within the city limits.

The courthouse scenes of the 2011 film Real Steel were filmed at the Ingham County Courthouse in downtown Mason.

Mason sits upon the Mason Esker, which is one of the longest eskers in the western hemisphere. 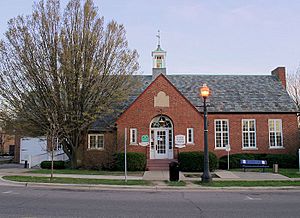 All content from Kiddle encyclopedia articles (including the article images and facts) can be freely used under Attribution-ShareAlike license, unless stated otherwise. Cite this article:
Mason, Michigan Facts for Kids. Kiddle Encyclopedia.