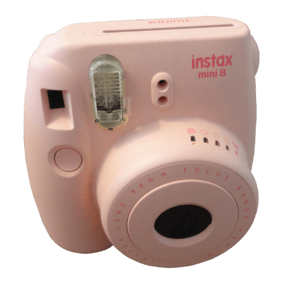 The instant camera is a type of camera which uses self-developing film to create a chemically developed print shortly after taking the picture. Polaroid Corporation pioneered (and patented) consumer friendly instant cameras and film, and were followed by various other manufacturers.

The invention of commercially viable instant cameras which were easy to use is generally credited to American scientist Edwin Land, who unveiled the first commercial instant camera, the model 95 Land Camera, in 1948, a year after unveiling instant film in New York City. The earliest instant camera, which consisted of a camera and portable wet darkroom in a single compartment, was invented in 1923 by Samuel Shlafrock.

Instant cameras have found many uses throughout their history. The original purpose of instant cameras was motivated by Jennifer Land's question to her father (Edwin Land): "Why can't I see them now?" Many people have enjoyed seeing their photos shortly after taking them, allowing them to recompose or retake the photo if they didn't get it right. But instant cameras were found to be useful for other purposes such as ID cards, passport photos, ultrasound photos, and other uses which required an instant photo. They were also used by police officers and fire investigators because of their ability to create an unalterable instant photo.

With the advent of digital photography, much of the instant camera's consumer appeal has been transferred to digital cameras. Passport photo cameras have gone to digital, leaving instant cameras to a niche market.

All content from Kiddle encyclopedia articles (including the article images and facts) can be freely used under Attribution-ShareAlike license, unless stated otherwise. Cite this article:
Instant camera Facts for Kids. Kiddle Encyclopedia.