The Institute for Colored Youth was founded in 1837 in Philadelphia, Pennsylvania, United States. After moving to Delaware County, Pennsylvania, and changing its name to Cheyney University, it continues as the oldest African-American school of higher education, although degrees were not granted by Cheyney until 1913; this did not matter. For prior to the Civil War, there was no structured higher education system for black students. Public policy and certain statutory provisions prohibited the education of blacks in various parts of the nation. The Institute for Colored Youth, the first higher education institution for blacks, was founded in Cheyney, Pennsylvania, in 1837. It was followed by two other black institutions--Lincoln University, in Pennsylvania (1854), and Wilberforce University, in Ohio (1856). The second site of the Institute for Colored Youth at Ninth and Bainbridge Streets in Philadelphia was added to the National Register of Historic Places in 1986. It is also known as the Samuel J. Randall School, and is a three-story, three-bay brick building built in 1865, in the Italianate-style

The Institute was founded by Richard Humphreys, a Quaker philanthropist who bequeathed $10,000, one-tenth of his estate, to design and establish a school to educate people of African descent. Born on a plantation in the West Indies, Humphreys came to Philadelphia in 1764, where he became concerned about the struggles of free African Americans to make a living. News of a race riot in 1829 prompted Humphreys to write his will, in which he charged thirteen fellow Quakers to design an institution "to instruct the descendents of the African Race in school learning, in the various branches of the mechanic Arts, trades and Agriculture, in order to prepare and fit and qualify them to act as teachers...."

Using the money Humphreys bequeathed, the Quakers formed an organization in 1837. For several years, they experimented with agricultural and industrial education, as well as trade apprenticeships for African-American children. By 1851, the Managers, as the Quakers came to be called, instead decided to focus on Humphreys's wish to train African-American children to become teachers. In 1852, the Managers opened the first Institute for Colored Youth building at 716–718 Lombard Street in Philadelphia.

Although operated by the Quaker Board of Managers, the faculty of the Institute for Colored Youth consisted entirely of African-American men and women. The Institute contained both Boys' and Girls' High Schools, as well as a Preparatory School. The school provided a classical education to young African Americans in Philadelphia, with a curriculum including advanced mathematics, sciences, English, philosophy, various social sciences, and classical languages. 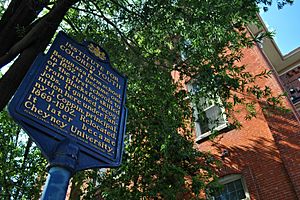 By 1861, the Managers recognized a need for a better facility for their growing school. After an extensive fundraising campaign, the Managers purchased a lot at 915 Bainbridge Street. The new Institute for Colored Youth building opened on March 9, 1866. It was capable of holding twice as many students as the original school and had facilities such as a lecture hall and chemistry laboratory.

In 1902 the Institute moved to George Cheyney's farm, 25 miles (40 km) west of Philadelphia, and afterward the name "Cheyney" became associated with the school.

The building is now used as condos.

All content from Kiddle encyclopedia articles (including the article images and facts) can be freely used under Attribution-ShareAlike license, unless stated otherwise. Cite this article:
Institute for Colored Youth Facts for Kids. Kiddle Encyclopedia.