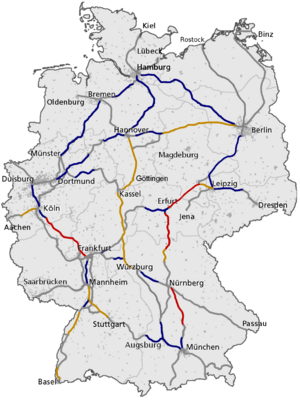 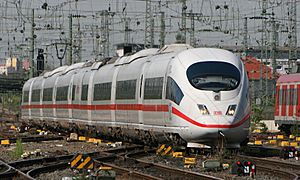 The ICE (InterCityExpress), is a category of high speed trains, which are operated by the Deutsche Bahn (in English: German Rail) since 1991.

The trains have an operating speed of up to 300 km/h. They are one of fastest trains in the world. Some of the high-speed lines in Germany are:

There are other (upgraded) lines where the trains can reach 200 km/h. Some new high-speed lines are under construction, some are in planning.

All content from Kiddle encyclopedia articles (including the article images and facts) can be freely used under Attribution-ShareAlike license, unless stated otherwise. Cite this article:
InterCityExpress Facts for Kids. Kiddle Encyclopedia.