Later construction included the conversion of Georgian terrace houses on Lansdowne Terrace into flats for postgraduate students, the conversion of similar properties on Guilford Street into two new sets of single and double study-bedrooms (known as House and Ingold), and the construction of X block (pronounced "cross-block", although room numbers there, e.g. X123, were pronounced "ex-one-two...") connecting Ingold and the West Wing. 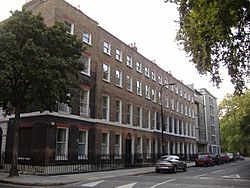 The Lansdowne Flats on Guilford Street.

The Hall underwent a major refurbishment in 2002-03. The refurbishment saw the demolition of the X block and the construction of a new Central Wing comprising studio flats for postgraduate students. The refurbishment also saw the construction of a new entrance on Lansdowne Terrace (the previous main entrance having been on Brunswick Square), and refurbishment of all facilities and rooms. The Georgian Terrace houses on Lansdowne Terrace and Guilford Street were also refurbished as large family flats. The newly refurbished Hall was reopened in December 2003 by the Chancellor of the University of London, HRH the Princess Royal.

For over 40 years, International Hall has accommodated a range of students from all over the world, although the majority have been British. Now one of eight University of London intercollegiate halls of residence, International Hall accommodates a maximum of 850 University of London students, partners and children. There is an even mix of men and women, and a diverse range of cultural and social backgrounds. 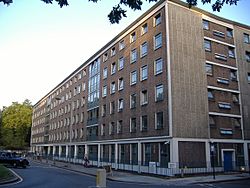 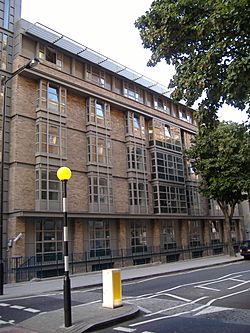 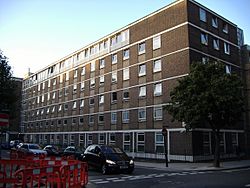 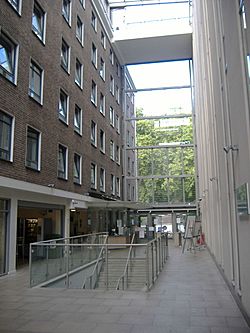 Inside the atrium looking towards reception and the main doors that lead out onto Lansdowne Terrace. 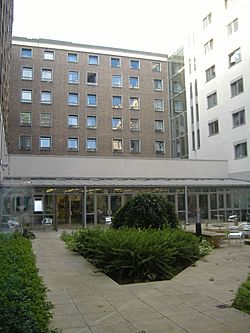 The courtyard by the common room and conservatory. 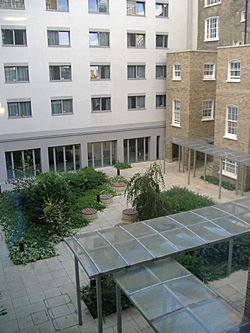 The Hall comprises three types of accommodation: single study-bedrooms which are the most common; studios, which are available to postgraduates only; and large family-style flats in the Georgian Terrace housing. Rooms are also available for students with disabilities. For single study bedrooms, every room has a washbasin, but toilet and shower facilities are all shared. The studio flats and Georgian Terrace flats have private bathrooms. Every room has an internal telephone and internet connections.

The Hall offers a range of facilities including: two study rooms; a computer/internet room; an activity room; a television room with Sky Freesat; a cinema; a TV room; a self-service restaurant; a coin-operated laundrette; a secure bike store; a squash court; two music rooms; two courtyard gardens; several common areas containing pool tables, ping pong, computer games and TV. There are numerous vending machines for soft drinks and snacks, and small pantries/kitchens on each floor of the North and West Wings, each equipped with a refrigerator and microwave. The Studio Flats and Georgian Terrace flats contain their own cooking facilities. The reception desk is open 24 hours a day; photocopying and fax services are available from reception.

For a large number of residents (mainly those in the single study bedrooms), International Hall is a fully catered hall of residence. Residents in the studio or Georgian Terrace flats are welcome to eat in the dining hall but must buy their meals. Breakfast is served daily between 8.00am-9.30am (11.00am-12.30pm on weekends). Dinner is served at 6.00pm-7.30pm daily.

The staff of the Intercollegiate Halls of Residence are divided into two groups: the management team, and the wardenial team. The two teams always work closely together, but have different sets of responsibilities. The management work full-time during office hours, whereas the wardenial staff are part-time members of staff who are either studying or working elsewhere in the University of London.

The Hall Manager has overall management responsibility for the Hall’s buildings, furnishings, and finances. The Hall Manager and their staff are responsible for the provision of catering, maintenance, telephone, Internet, housekeeping, and reception services. They also look after the Hall’s commercial activities, including conferences, bed & breakfast, and group bookings.

The Warden and Senior Members are part-time members of staff resident within the Hall, responsible for student welfare and pastoral care, discipline, re-admissions, Hall community and social life, and out-of-hours emergency cover.

The Wardenial team are all experienced academics, teachers, or postgraduate students within the University of London. They are available to offer support and guidance to students, and can help with problems both inside and outside the Hall, including academic difficulties, medical or emotional problems, social concerns, financial worries, and problems with the behaviour of other residents (e.g. noisy neighbours).

The Warden and Senior Members oversee the elected residents’ Club Committee, which organises various social and sporting events throughout the year.

The Wardenial team all trained as fire marshals, and have first aid training. They participate in an on-call Duty Officer rota covering nights and weekends to deal with any emergencies while the Hall Manager's Office is closed. They can be contacted via reception at any time.

All content from Kiddle encyclopedia articles (including the article images and facts) can be freely used under Attribution-ShareAlike license, unless stated otherwise. Cite this article:
International Hall, London Facts for Kids. Kiddle Encyclopedia.