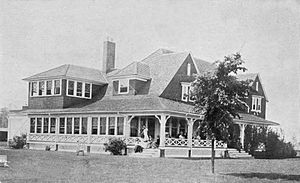 Inverness Club is a private golf club in Toledo, Ohio.

Opened in 1903, the club has hosted four U.S. Opens and two PGA Championships. Inverness is the only club to have hosted the U.S. Open, U.S. Amateur, U.S. Senior Open, and U.S. Junior Amateur Championships. From 1935 to 1954, it also hosted the Inverness Invitational Four-Ball. Byron Nelson served as the club's head golf professional from 1940 to 1944 and considered it his "home course." S.P. Jermain, the club's founder and first Board President, was credited with conceiving the idea for the Ryder Cup. The championship course was designed by renowned architect Donald Ross.

Inverness Club is set to host a newly created LPGA Tour event at the end of July 2020 (the Drive On Championship] as well as the 2021 Solheim Cup.

Inverness was founded in 1903, when many of Toledo's wealthiest citizens purchased a parcel of land and built a nine-hole golf course. The course was eventually expanded to 18 holes. In 1916, the club hired Donald Ross to construct a championship-caliber golf course, which was finished by the end of 1918. In his unpublished book, Golf Has Never Failed Me, Ross discussed the design of Inverness and only six other courses, out of the hundreds he designed.

Before 1920 in the United States, golf professionals were prohibited from entering the clubhouse, as they were once seen as little more than servants to their patron members of the country club. As professional golf tournaments began to appear in the early part of the 20th century, the visiting pros were treated the same as the home pros.

By 1920, attitudes had begun to change. Sylvanus Pierre Jermain, considered "the father of public golf in Toledo", lobbied the USGA and the members of Inverness to agree to allowing all players, including pros, into the clubhouse at the upcoming 1920 U.S. Open. Both parties agreed, and Inverness thus became the first golf club in the U.S. to allow pros in the clubhouse.

As a gift for the boldness and generosity Inverness had shown, Walter Hagen gathered other professional golfers when the U.S. Open returned to Inverness in 1931 so that a gift could be purchased for the club. Together they purchased a grandfather clock for the club house which is still housed there today. On the brass plate of the clock, this inscription was written:

Winners of major tournaments held at Inverness Club include:

All content from Kiddle encyclopedia articles (including the article images and facts) can be freely used under Attribution-ShareAlike license, unless stated otherwise. Cite this article:
Inverness Club Facts for Kids. Kiddle Encyclopedia.