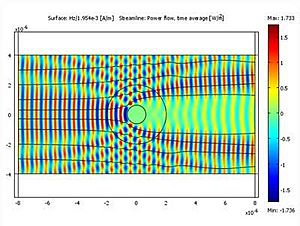 Simulation of how a cloaking device would work. Cloaking device deactivated: Light is reflected and absorbed by the object, causing it to be visible 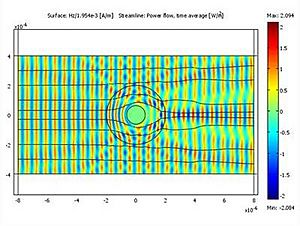 Simulation of how a cloaking device would work. Cloaking device active: Light is deflected around the object, causing it to be invisible

A cloaking device is a theoretical or fictional stealth technology that can cause objects, such as spaceships or individuals, to be partially or wholly invisible to parts of the electromagnetic (EM) spectrum. However, over the entire spectrum, a cloaked object scatters more than an uncloaked object.

Fictional cloaking devices have been used as plot devices in various media for many years.

Developments in scientific research show that real-world cloaking devices can obscure objects from at least one wavelength of EM emissions. Scientists already use artificial materials called metamaterials to bend light around an object.

Star Trek screenwriter Paul Schneider, inspired in part by the 1958 film Run Silent, Run Deep, imagined cloaking as a space-travel analog of a submarine submerging, and employed it in the 1966 Star Trek episode "Balance of Terror". Another Star Trek screenwriter, D.C. Fontana, coined the term cloaking device for the 1968 episode "The Enterprise Incident".

Writers and game designers have since incorporated cloaking devices into many other science-fiction narratives, including Doctor Who, Star Wars, and Stargate.

An operational, non-fictional cloaking device might be an extension of the basic technologies used by stealth aircraft, such as radar-absorbing dark paint, optical camouflage, cooling the outer surface to minimize electromagnetic emissions (usually infrared), or other techniques to minimize other EM emissions, and to minimize particle emissions from the object. The use of certain devices to jam and confuse remote sensing devices would greatly aid in this process, but is more properly referred to as "active camouflage". Alternatively, meta-materials provide the theoretical possibility of making electromagnetic radiation pass freely around the 'cloaked' object.

Optical metamaterials have featured in several recent proposals for invisibility schemes. "Metamaterials" refers to materials that owe their refractive properties to the way they are structured, rather than the substances that compose them. 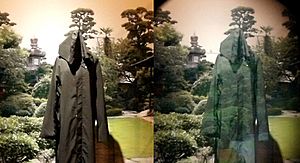 A coat using optical camouflage by Susumu Tachi. Left: The coat seen without a special device. Right: The same coat seen though the half-mirror projector part of the Retro-Reflective Projection Technology.

Active camouflage (or adaptive camouflage) is a group of camouflage technologies which would allow an object (usually military in nature) to blend into its surroundings by use of panels or coatings capable of changing color or luminosity.

Plasma at certain density ranges absorbs certain bandwidths of broadband waves, potentially rendering an object invisible. However, generating plasma in air is too expensive and a feasible alternative is generating plasma between thin membranes instead. A plasma cloaking device was patented in 1991.

A prototype Metascreen is a claimed cloaking device, which is just few micrometers thick and to a limited extent can hide 3D objects.

The concepts of cloaking are not limited to optics but can also be transferred to other fields of physics. For example, it was possible to cloak acoustics for certain frequencies as well as touching in mechanics. This renders an object "invisible" to sound or even hides it from touching.

A recent review said these methods were possible:

All content from Kiddle encyclopedia articles (including the article images and facts) can be freely used under Attribution-ShareAlike license, unless stated otherwise. Cite this article:
Cloaking device Facts for Kids. Kiddle Encyclopedia.