Invitation to the Dance facts for kids 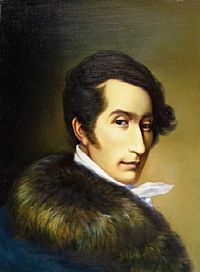 "Invitation to the Dance" is a piece of music for solo piano written by Carl Maria von Weber in 1819. It is written in D-flat major in rondo form. It was the first concert waltz. This means it was meant to be listened to rather than danced to.

In 1841, Hector Berlioz made an arrangement for orchestra. In 1911, the Berlioz version was used for a short ballet called Le Spectre de la rose. This ballet starred Nijinsky and Karsavina. It became very well known.

All content from Kiddle encyclopedia articles (including the article images and facts) can be freely used under Attribution-ShareAlike license, unless stated otherwise. Cite this article:
Invitation to the Dance Facts for Kids. Kiddle Encyclopedia.