Iodine deficiency is a lack of the trace element iodine, an essential nutrient in the diet. It may result in a goiter, sometimes as an endemic goiter as well as cretinism due to untreated congenital hypothyroidism, which results in developmental delays and other health problems. Iodine deficiency is an important public health issue as it is a preventable cause of intellectual disability.

Iodine is an essential dietary mineral; the thyroid hormones thyroxine and triiodothyronine contain iodine. In areas where there is little iodine in the diet, typically remote inland areas where no marine foods are eaten, iodine deficiency is common. It is also common in mountainous regions of the world where food is grown in iodine-poor soil. 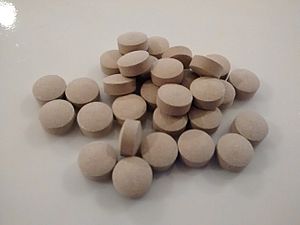 Prevention includes adding small amounts of iodine to table salt, a product known as iodized salt. Iodine compounds have also been added to other foodstuffs, such as flour, water and milk, in areas of deficiency. Seafood is also a well known source of iodine.

All content from Kiddle encyclopedia articles (including the article images and facts) can be freely used under Attribution-ShareAlike license, unless stated otherwise. Cite this article:
Iodine deficiency Facts for Kids. Kiddle Encyclopedia.