Founded in 1870 by Sylvester Johnson and Jacob Julian, Irvington was originally created as a suburban town of Indianapolis. It formed along winding roads of dirt and brick that reflected landscape design in the Romantic era. The town was built as a quiet suburb where artists, politicians, military generals, academics, and heads of local industry resided. In 1902, Irvington was annexed by Indianapolis.

Irvington is located five miles (8 km) east of downtown Indianapolis on the western edge of Warren Township. The neighborhood is situated on Washington Street, which is the route of the historic National Road, a National Scenic Byway. US 40 was formerly routed along the road. Through the early 1900s, a commuter rail/trolley system ran from Irvington to downtown Indianapolis along US 40.

Irvington is the largest locally protected historic district in Indianapolis. The district includes roughly 2,800 buildings and about 1,600 parcels of land. Seventy-eight percent of Irvington homes were built before 1960. Irvington began petitioning its residents in 2001 through the efforts of the Historic Irvington Community Council. The Irvington Historic District Neighborhood Plan was adopted by the Indianapolis Historic Preservation Commission on October 4, 2006.

From 1875 to 1928, Irvington was the home of Butler University. Butler transformed Irvington into a college community. The campus grew in the southwest corner of Irvington, between the Pennsylvania Railroad and the B&O Railroad tracks. Buildings at the campus eventually included the Main Building (1875), Science Building (1892), Women's Dorm (1880s), Bona Thompson Memorial Library (1903, today known as Bona Thompson Memorial Center), and a World War I era gymnasium. The Christian Women's Board of Missions built a Missionary Training School in 1909 adjacent to the campus. By the 1910s, the university had over one thousand students. All the Butler buildings have since been demolished except for the Bona Thompson Memorial Library and the President's Home (which is now Irvington United Methodist Church, locally called the "Church on the Circle"). Built in 1903, the Bona Thompson Memorial Center is the current home of the Irvington Historical Society. It houses the Irvington Historical Society's art collection and historical documents. The Society's art collection can be viewed in the rehabilitated gallery space. Also on display are various art shows, including a yearly juried show. Events from meetings to weddings and receptions are held at the Center.

Irvington is a family-friendly neighborhood. Throughout the year, several festivals are held in the community that allow friends and neighbors to come together.

For over 10 years, the Irvington Historical Society has hosted an ice cream social at the Bona Thompson Memorial Center. Ice cream, displayed art, and music attract neighbors to the event so they can learn more about the history of Irvington and tour the library.

The Annual Benton House Tour of Homes provides the public an opportunity to tour area homes, churches and other area building of either historical or architectural significance, including The Benton House and Bona Thompson Memorial Center. In 2018, the tour marked its 45th consecutive year. It is held the third weekend in September.

The Irvington Farmers Market, one of the most popular farmers markets in Indianapolis, is held every year beginning in June and lasting through October.

Our Lady of Lourdes Catholic Parish, located in the heart of Irvington, holds an annual carnival on their property to raise money for the church. The carnival features rides, games, and neighborhood information.

The Pour House hosts the annual "Baby it's Cold Outside" fundraiser during December in Irvington to raise funds to help men in Indianapolis that are experiencing homelessness. This event features music, dancing, drinks, raffles, and a silent auction.

The Irvington Halloween Festival is a non-profit event founded in 1947 by the Irvington Community Council in an effort to bring together residents, neighborhood organizations, and businesses in Irvington for a celebration of heritage and community. The festival encompasses the week leading up to October 31, culminating in a street festival on the final Saturday. East Washington Street is closed through downtown Irvington to hold the street festival. Events include a 5-mile run, a pageant, musicians, contests, Halloween-themed movies, storytelling, ghost tours, live theater, roller derby, a haunted puppet show, and dozens of other events.

Irvington was the birthplace and home to the only historic art movement in Central Indiana named for a specific place, the Irvington Group. In the early 1900s, this group of artists lived, met, practiced and exhibited art in Irvington. Today, many of the artists' homes and studios remain standing throughout the community.

The Irvington Lodge, Bona Thompson Memorial Library, and The Studio School & Gallery are public venues where arts are currently taught and displayed throughout the Irvington neighborhood.

Built in 1913, the Irving Theatre was originally used for a nickelodeon. In 1926, the theatre went under major renovations; adding six rental units, a second story, and lengthening the theatre. Throughout the decades, the theatre's uses differed until it closed in the mid-1990s. It sat unoccupied until 2005, when it was reopened, and has been looking for funds to be renovated since then. The theatre is a hub for live music, films, and art, community, and private events. Three apartment units are on the second floor.

The Irving is one of the city's largest all-ages music venues. With a capacity of over 700 people, the theatre hopes to attract bands that would otherwise pass on an Indianapolis visit.

The Irving Theater now hosts WOOT-FM Community Radio Project in the far western storefront. WOOT-FM is a not for profit community radio station featuring local musicians and acts. WOOT-FM's plan is to receive their LPFM license in the year 2014 serving the Indianapolis metropolitan area.

Church congregations came with the new families. One of the oldest is an African-American congregation, Irvington Baptist Church. Formed in 1887, it is one of the oldest African-American congregations in Marion County. Additional churches like Downey Avenue Christian Church first met in the Butler University Main Building, and later built a church in the 1890s. Presbyterians gathered to form a church in the early 1900s, as the Methodists had done in the decades before. Catholics petitioned for a parish in 1909, which became the aforementioned Our Lady of Lourdes. All of these denominations maintain beautiful historic houses of worship today.

Irvington has a long history of libraries. In 1903, the Bona Thompson Library was open to Butler students and the public. Since then, a local Irvington library has always been open to residents in different locations ranging from homes to particular structures. In 1956, the Hilton U. Brown Library, named in honor of the Irvington resident, opened on East Washington Street. In 2001, a new, state-of-the-art Irvington Branch Library opened at 5625 East Washington Street. The former Brown Library building is now used for early education by Indianapolis Public Schools.

Irvington was also home to the Children's Guardian Home on University Avenue, before it was converted to a new high school for the Irvington Preparatory Academy. 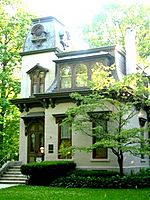 Irvington is both architecturally and culturally significant to Indianapolis and Marion County. The area contains excellent examples of every major American architectural style from 1870 to 1950, including Italianate, French Second Empire, Victorian Gothic, Queen Anne, Colonial Revival and Tudor Revival. However, Irvington is perhaps best known for its fine collection of Arts & Crafts architecture, including the only known example of a Gustav Stickley designed house in Indiana.

Washington Street is home to several historic business buildings including the old bank (now Jack and Jill's Antique Shop) and the Irving Theatre.

The Benton House was built in 1873 by Nicholas Ohmer, and was the home of Allen R. Benton, a former president of Butler University, Irvington. The Irvington Historic Landmarks Foundation was formed in 1966 to oversee the purchase and restoration of the house. In 1973, the home was placed on the National Register of Historic Places. It is the only house on the National Register on the Indianapolis East Side listed in the Historic Register that is available to the public.

The Stephenson Mansion was listed on The National Register of Historic Places as the William H. H. Graham House in 1982. The home was built in 1889 for William H. H. Graham, who was associated with the Benjamin Harrison administration. It also served as a sorority home for Kappa Kappa Gamma students at Butler University in 1923. D. C. Stephenson acquired the home in 1923 and remodeled it to resemble a Civil War-era plantation home. The home is one of several in the neighborhood that are interesting to people who believe in haunted houses.

Ellenberger Park is located in northern Irvington. The park was named for John Ellenberger, the farmer who owned the land prior to the city's original 32-acre (13 ha) purchase of the woods for the community in 1909. Additional acreage was purchased in 1911 and 1915, increasing the size of the park to 42 acres (17 ha). Landscape architect and urban planner George Kessler developed this park and Pleasant Run Parkway in the early 1900s as part of his Indianapolis Park and Boulevard System. Kessler's design retained much of the original character of the site, including a refusal to install walkways other than the preexisting paths. In 1922, the city parks board renamed the park as Jameson Park in honor of Dr. Henry Jameson, the chairman of the board when the park and boulevard system were designed and constructed, but protests by Irvington residents resulted in the reversal of that decision in 1926. In 1930, the park added a pool, and in 1962, an ice rink was installed, which was later closed in 2009. The park also includes two playgrounds, eight tennis courts, a baseball diamond, softball diamond, football field, fitness trail, beach volleyball court, and a hill perfect for winter sports such as sledding and snowboarding. Ellenberger Park hosts outdoor movie screenings in the summer. In recent years, the city of Indianapolis has finished constructing the Pleasant Run Trail greenway. The trail currently runs 6.9 miles (11.1 km) and connects Ellenberger Park with Garfield Park, the oldest park in the city, on the old south side of Indianapolis; significant northern and southern expansions are planned for the trail.

At the center of Irvington is South Irvington Circle Park, surrounded by a round-about street intersection. The park includes a fountain, a bust of Washington Irving, and personalized brick paths. Band concerts are often held on the circle throughout the summer season.

In September 2009, Mayor Greg Ballard and local citizens celebrated the opening of the Pennsy Trail, a 1.2-mile (1.9 km) walking, running, and biking trail between Arlington Avenue and Shortridge Road. Named for the Pennsylvania Railroad that ran through this area until its tracks were pulled up in 1982, most of the trail follows along residential housing. It also connects the Bonna Shops at Bonna and Audubon, and the Irvington Charter Elementary school.

All content from Kiddle encyclopedia articles (including the article images and facts) can be freely used under Attribution-ShareAlike license, unless stated otherwise. Cite this article:
Irvington Historic District (Indianapolis) Facts for Kids. Kiddle Encyclopedia.