The Isaac Bell House is a historic house and National Historic Landmark at 70 Perry Street (at the corner with Bellevue Avenue) in Newport, Rhode Island. Also known as Edna Villa, it is one of the outstanding examples of Shingle Style architecture in the United States. It was designed by McKim, Mead, and White, and built during the Gilded Age, when Newport was the summer resort of choice for some of America's wealthiest families. 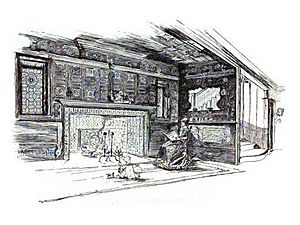 Shingle Style was pioneered by Henry Hobson Richardson in his design for the William Watts Sherman House, also in Newport. This style of Victorian architecture, featuring the extensive use of wooden shingles on the exterior, acquired some popularity in the late nineteenth century. The Isaac Bell House exemplifies this through its unpainted wood shingles, simple window and trim detail, and multiple porches. It combines elements of the English Arts and Crafts movement philosophy, colonial American detailing, and features a Japanese-inspired open floor plan and bamboo-style porch columns. Interior features include inglenook fireplaces, natural rattan wall coverings, wall paneling and narrow-band wooden floors.

During its life, the house has variously been divided into apartments and served as a nursing home. With the help of Carol Chiles Ballard, the house was bought in 1994 by the Preservation Society of Newport County, which won awards for its restoration, and now operates it as a museum.

The Isaac Bell House was declared a National Historic Landmark in 1997.

All content from Kiddle encyclopedia articles (including the article images and facts) can be freely used under Attribution-ShareAlike license, unless stated otherwise. Cite this article:
Isaac Bell House Facts for Kids. Kiddle Encyclopedia.