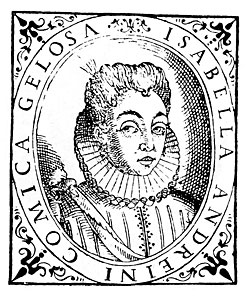 Isabella Andreini (born Isabella Canali, 1562 – 10 June 1604), also known as Isabella Da Padova, was an Italian actress and writer. Considered beautiful, elegant, and well educated, she was one of the most famous performers of her time. Isabella Andreini was a member of the Compagnia dei Comici Gelosi, an influential touring theatre company that performed for the highest social circles of Italy and France. Famous in her time, and distinguished both for her acting and her character, the role of Isabella of the commedia dell'arte was named after her.

All content from Kiddle encyclopedia articles (including the article images and facts) can be freely used under Attribution-ShareAlike license, unless stated otherwise. Cite this article:
Isabella Andreini Facts for Kids. Kiddle Encyclopedia.