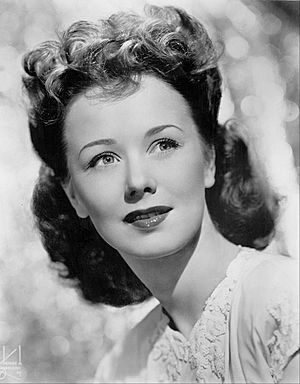 Iva Withers (July 7, 1917 – October 7, 2014) was a Canadian-born American actress and singer, best remembered as a replacement player who had long runs in some of Rodgers and Hammerstein's biggest musical theatre hits. From 1945-70, she worked almost continuously on Broadway or in national tours, generally as a replacement.

Withers was first hired about 1943 to understudy the leading ladies in the Broadway casts of Oklahoma! and Carousel. She soon replaced the original star of Carousel, playing Julie Jordan more than 600 times on Broadway and becoming the first Julie in London in 1950. She was next a replacement for Adelaide in Guys and Dolls.

She was a replacement or standby in more than a half dozen other Broadway shows throughout the 1950s and 1960s, and she also toured North America in the leading roles in Carousel, South Pacific and Gentlemen Prefer Blondes. Her last Broadway role was in Forty Carats (1968–1970), after which she left show business. 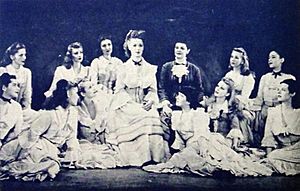 Withers as Julie in Carousel in 1947

Pearl Iva Edith Withers was born in Rivers, Manitoba, Canada, the daughter of Roy and Edith Withers, an insurance salesman and a seamstress, respectively, who had emigrated from Ireland around 1913.

As a child in Winnipeg, she appeared in local vaudeville productions and continued to sing in church during her teenage years. She moved to New York in 1940 to study singing "so she could improve her voice when she performed in church". She spent seven months in 1942 in wartime England searching for her brother and boyfriend, both of whom had been killed.

Withers returned to New York to audition for roles on Broadway, shortening her name to Iva Withers. About 1943, she was hired by Rodgers and Hammerstein in the ensemble of Oklahoma!.

Withers died in Englewood, New Jersey at age 97 on October 7, 2014 at the Lillian Booth Actors Home.

All content from Kiddle encyclopedia articles (including the article images and facts) can be freely used under Attribution-ShareAlike license, unless stated otherwise. Cite this article:
Iva Withers Facts for Kids. Kiddle Encyclopedia.