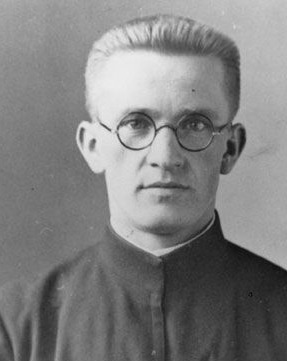 Józef Cyrek (born 13 September 1904 in Bysina; d. 2 September 1940 at Auschwitz) was a Polish writer and Roman Catholic clergyman, member of the Society of Jesus involved in the religious publishing industry, who shortly after the Nazi invasion of Poland was arrested by the Gestapo, imprisoned at several places of detention, and lastly deported to the Auschwitz concentration camp where he was murdered.

He has in recent years been accorded the title of Servant of God and is in the process of being beatified by the Catholic Church.

All content from Kiddle encyclopedia articles (including the article images and facts) can be freely used under Attribution-ShareAlike license, unless stated otherwise. Cite this article:
Józef Cyrek Facts for Kids. Kiddle Encyclopedia.