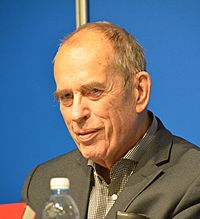 Jörn Johan Donner (5 February 1933 – 30 January 2020) was a Finnish writer, movie director, actor, producer, and politician. He was the founder of Finnish Film Archive. Donner was born in Helsinki, Finland.

In 1979, he was a member of the jury at the 29th Berlin International Film Festival. Donner was best known as the producer of Ingmar Bergman's movie Fanny and Alexander (Fanny och Alexander, 1982). In 1984 the movie won a total of four Academy Awards including the award for best foreign language film, making him to date the only Finn to receive an Oscar.

His novel Far och son (Father and Son) won the Finlandia Prize in 1985.

Donner had prostate and lung cancers. He died of lung disease on 30 January 2020 at a hospital in Helsinki, aged 86.

All content from Kiddle encyclopedia articles (including the article images and facts) can be freely used under Attribution-ShareAlike license, unless stated otherwise. Cite this article:
Jörn Donner Facts for Kids. Kiddle Encyclopedia.