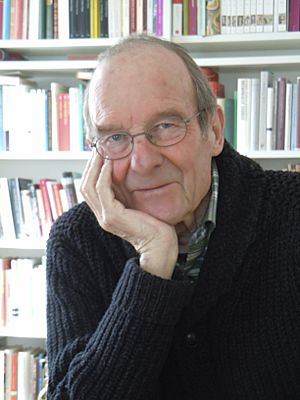 Jürg Schubiger (14 October 1936 – 15 September 2014) was a Swiss children's writer and psychologist. In 1996, for his work on Als die Welt noch jung war, he won the Deutscher Jugendliteraturpreis (German Youth Literature Award). He was also the biennial Hans Christian Andersen Medal in 2008 for his work on children's books. He wrote around thirty books between 1956 and 2010. He also wrote prose novels.

Schubiger was born in Zürich and raised in Winterthur. He graduated from the University of Zürich. He was married to Renate Bänninger Schubiger. The couple had two sons.

All content from Kiddle encyclopedia articles (including the article images and facts) can be freely used under Attribution-ShareAlike license, unless stated otherwise. Cite this article:
Jürg Schubiger Facts for Kids. Kiddle Encyclopedia.