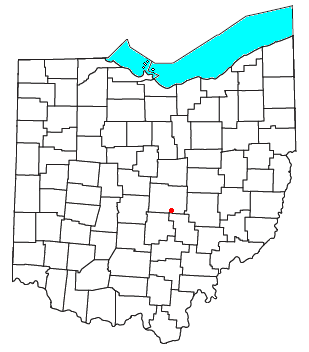 Jacksontown is an unincorporated community in central Licking Township, Licking County, Ohio, United States. Although it is unincorporated, it has a post office, with the ZIP code of 43030. It lies at the intersection of U.S. Route 40 with State Route 13.

Jacksontown is the birthplace of Carl Osburn, winner of five Olympic gold medals, four silver medals and two bronze. It is also the headquarters for the Ohio Department of Transportation's (ODOT) District 5.

Jacksontown was originally called Jackson, and under the latter name was laid out in 1829. The community was named after Andrew Jackson, seventh President of the United States. A post office has been in operation under the name Jacksontown since 1831.

All content from Kiddle encyclopedia articles (including the article images and facts) can be freely used under Attribution-ShareAlike license, unless stated otherwise. Cite this article:
Jacksontown, Ohio Facts for Kids. Kiddle Encyclopedia.