The Jacksonville Landing (also informally known as The Landing) was a festival marketplace in Downtown Jacksonville, Florida. It was located at the intersection of Independent Drive and Laura Street, along the Jacksonville Riverwalk. It was built by the Rouse Company at a cost of $37.5 million and opened in 1987 and officially closed after the 4th of July festivities in 2019. Demolition commenced around October 8, 2019. The 126,000 square feet (11,706 m2) center was comparable to New York City's South Street Seaport, Boston's Faneuil Hall and Miami's Bayside Marketplace, all developed by Rouse. 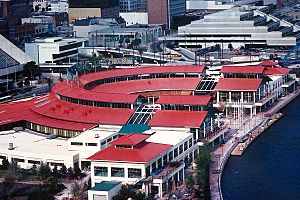 The Jacksonville Landing in 1987.

The Jacksonville Landing was designed and built by the Rouse Company, who developed a number of similar structures in other cities. It opened its doors on June 25, 1987. The Jacksonville Landing hosted a week-long celebration featuring a drum and bugle corps, balloon release, community choirs and national acts. The Rouse company partnered with City of Jacksonville, who contributed $20 million toward the construction of a festival marketplace that would revitalize the city's core.

The first level of the Landing featured tenants that were common to other shopping malls when it first opened, including stores like Foot Locker, The Gap, Victoria's Secret and more.

The entire second level of the main building was devoted to the Founders Food Hall, a food court with 18 restaurants. The decor featured silhouettes of 17 individuals who had a role in the settlement of North Florida. Outside seating included a view of the center courtyard fountain, stage, and the river. However, anticipated foot traffic never reached projected numbers and within four years, one-third of the food court tenants closed. The west side of the food court became a video arcade named Ostrich Landing which also later closed. More and more food tenants started closing and later, in 2019, the food court closed completely after the non-related shooting at the Landing. The Landing management staff blocked off and disabled the escalators to the second floor at that time.

The Landing's first bar was Fat Tuesdays, which offered frozen alcoholic beverages. The business attracted a mostly younger clientele, and the Landing management decided not to renew their 10-year lease when it expired, citing a desire for an "older crowd".

The Rouse Company announced in 2003 that it would sell the Jacksonville Landing to local developer Toney Sleiman for $5.1 million. The Florida Times-Union revealed that Sleiman, who bought the buildings but not the city-owned land, would not have to pay the $100,000 rent required by the City of Jacksonville for the land until the city provided the 800 parking spaces it had promised the previous owners.

The 23-year obligation was finally resolved in 2010. The Jacksonville City Council passed a bill to contribute $3.5 million toward Sleiman's purchase of an existing parking lot across from the Landing. That money included a 20-year parking validation program at a cost of $2.5 million to the city. Mayor John Peyton vetoed the bill, but the council voted unanimously to override the veto.

A mass shooting occurred at a video game tournament that was held on August 26, 2018, at the GLHF Game Bar, leaving multiple people injured, along with three people dead, including the perpetrator.

On February 20, 2019, the city of Jacksonville and Sleiman Enterprises reached an $18 million settlement that transfers ownership of Jacksonville Landing to the city. The agreement includes $1.5 million to buy out the remaining tenants' leases and an additional $1.5 million to demolish the mall for future redevelopment of the site. 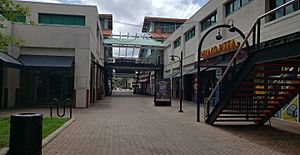 The Jacksonville Landing in 2019.

The city received demolition bids and has bids ranging from $978,200 to $2,776,000. Plant City-based D.H. Griffin bid $1.074 million to tear down the shuttered Downtown shopping mall, one of seven sealed bids received by the 2 p.m. June 14 deadline. The Department of Public Works recommended this bid to the General Government Awards Committee and they voted at the next meeting to approve this recommendation. The vote passed and D.H. Griffin will start site work 10 calendar days after the city sends the contractor a written notice to begin.

The Landing wasn't officially fully closed until after July 4th as it was the primary viewing spot for the July 4th festivities.

On August 5th news surfaced that D.H. Griffin Wrecking Co. Inc, the company hired to demolish the Landing, will begin putting up fencing to block off the area so workers can start site work and prepare for the demolition. This won't be completed until after BBVA bank closes on October 28th, 2019.

In August of 2019 Mayor Lenny Curry stated this about a plan to include residential, restaurants and possibly a museum. "I think that those are the options that are on the table. What will happen is, as demolition happens, the Downtown Investment Authority will put out a request for proposal to the market to say, you know, to private investors, what would you like to do here? What can you do here? My personal opinion is it should be a combination of some green space, not all, we don't want just a park there, but a combination of some green space, and then some sort of buildings that are iconic, that serve the public. It's an important piece of property. I also think should you be able to see the river from Laura Street. We don't want to block the view of that wonderful jewel." There are a number of citizens that feels the mayor didn't include them in the decision on demolishing or renovating the Landing.

The two-level glass-and-steel complex with the orange roof is located on the north bank of the St. Johns River. The 9-acre (36,000 m2) complex at one time featured 65 stores as well as dining, with full-service restaurants plus a food court, and entertainment. The Landing staged a variety of special events. There was weekly live music on the courtyard stage. Most events took place in the open brick courtyard in the center of the horseshoe shaped structure. Just before the Georgia-Florida football game in 2007, the Landing installed a 19 × 15-foot (5.8 × 4.6 m) JumboTron in the courtyard.

The Jacksonville Landing (usually referred to as just the Landing by locals) had a local patronage base of over 65,000 downtown office workers and over 1,000,000 residents in the surrounding metropolitan area of North Florida. According to various Florida travel sources, it had been "an icon" for Jacksonville and "one of the most recognized attractions in Northeast Florida" since it opened in June, 1987. Downtown Improvement District (DID) for Jacksonville claims it was a popular tourist destination. 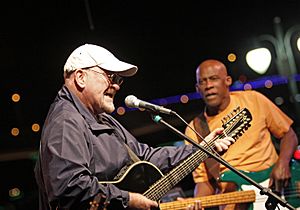 Concert at the Jacksonville Landing in 2008.

Weekly events included year-round live entertainment in the center courtyard every Friday, Saturday and Sunday. The bands offered a variety of music including classic rock, oldies, contemporary, jazz, and top 40. The Landing also hosted national country concerts and classic rock concerts in the spring, summer and fall each year.

In September, 2010, The Landing announced a partnership with Downtown Vision to host an every Friday Farmer's Market from 10am to 2pm. The market was relocated from Hemming Plaza. Since relocating to The Landing the market averaged over 40 vendors each week.

The Landing also hosted events for the community, such as charity walks and runs and the Earth Day Ecology Fair.

The Landing allowed the Jacksonville Maritime Museum to use unoccupied retail space to display their collection of large-scale model ships for seven years, beginning in 1990. It was a positive for both parties; the museum increased their exposure with a free venue and the Landing filled an otherwise empty storefront and offered a free attraction to increase foot traffic. Jacksonville Maritime Museum Society President John Lockhart explained, "Every time they would get a new tenant, they would move us to another empty space." That situation occurred five times in seven years, but in mid-November, 1997, the museum was given seven days to vacate in preparaton for a new tenant. "This time, they just ran out of empty space," commented Lockhart. Many exhibits were put into storage.

In October 2011, the museum was invited to return to the landing, and was given a large space to use. Their former home on the Southbank of the Riverwalk was demolished as part of a larger renovation that included Friendship Fountain.

All content from Kiddle encyclopedia articles (including the article images and facts) can be freely used under Attribution-ShareAlike license, unless stated otherwise. Cite this article:
Jacksonville Landing Facts for Kids. Kiddle Encyclopedia.