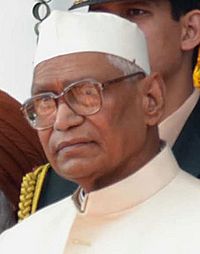 Jagannath Pahadia (born 15 January 1932) is an Indian politician. He is known for being the former leader of the Indian National Congress party. He was the Governor of Haryana from 2009 to 2014, Governor of Bihar from 1989 to 1990 and the Chief Minister of Rajasthan from 1980 to 1981. He was born in Rajasthan.

All content from Kiddle encyclopedia articles (including the article images and facts) can be freely used under Attribution-ShareAlike license, unless stated otherwise. Cite this article:
Jagannath Pahadia Facts for Kids. Kiddle Encyclopedia.