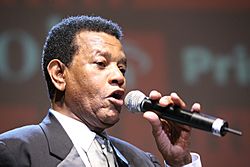 Jair Rodrigues de Oliveira (February 6, 1939 – May 8, 2014) was a Brazilian musician and singer. His career began during the 1950s. He was known for his many albums such as O Menino da Porteira, Boi da Cara Preta and Majestade o Sabiá. He sang funk and samba music.

Rodrigues was born in Igarapava, Brazil. He died in Cotia, Brazil, aged 75.

All content from Kiddle encyclopedia articles (including the article images and facts) can be freely used under Attribution-ShareAlike license, unless stated otherwise. Cite this article:
Jair Rodrigues Facts for Kids. Kiddle Encyclopedia.