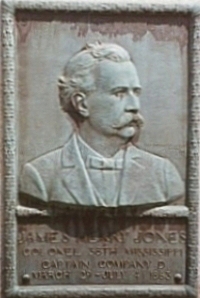 Born in Shelby County, Alabama, Jones moved with his parents to Talladega County, Alabama, in early youth. He pursued an academic course and studied law. He was admitted to the bar in 1851 and commenced practice in Henderson, Texas.

During the Civil War Jones enlisted in the Confederate States Army and served as captain and lieutenant colonel of the Eleventh Texas Infantry, and later as colonel commanding the Third Brigade of Walker's Texas Division.

All content from Kiddle encyclopedia articles (including the article images and facts) can be freely used under Attribution-ShareAlike license, unless stated otherwise. Cite this article:
James H. Jones Facts for Kids. Kiddle Encyclopedia.