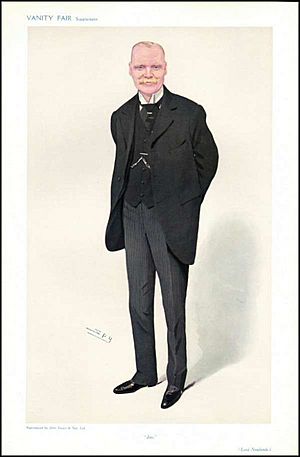 "Jim"
Lord Newlands as caricatured by Spy (Leslie Ward) in Vanity Fair, May 1909

Hozier was the son of William Hozier, 1st Baron Newlands.

He was educated at Eton College and at Balliol College, Oxford. In 1880, he married Lady Mary Louisa Wellesley Cecil, a daughter of the 3rd Marquess of Exeter.

He served as a Third Secretary in the Diplomatic Service from 1876, as Diplomatic Secretary at the Constantinople Conference, 1876–1877, and as Private Secretary to the Marquess of Salisbury while he was Secretary of State for Foreign Affairs from 1878–1880 and again as Prime Minister from 1885–1886.

He then entered Parliament and sat as Conservative Member of Parliament for South Lanarkshire from 1886–1906. He was Grand Master Mason of Scotland from 1899–1903 and was Brigadier of the Royal Company of Archers from 1910. He received the Freedom of the City of Glasgow in 1917.

He died without issue and his title became extinct.

All content from Kiddle encyclopedia articles (including the article images and facts) can be freely used under Attribution-ShareAlike license, unless stated otherwise. Cite this article:
James Hozier, 2nd Baron Newlands Facts for Kids. Kiddle Encyclopedia.