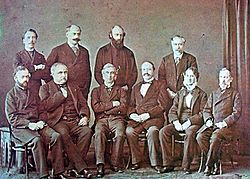 The 1876–1877 Constantinople Conference (or ‘Shipyard Palace Conference’, from the conference venue) of the Great Powers (Britain, Russia, France, Germany, Austria-Hungary and Italy) was held in Istanbul (Constantinople) from 23 December 1876 until 20 January 1877. Following the Herzegovinian Rebellion started in 1875 and the Bulgarian Uprising in April 1876, the Great Powers agreed on a project for political reforms both in Bosnia and in the Ottoman territories with a majority Bulgarian population. 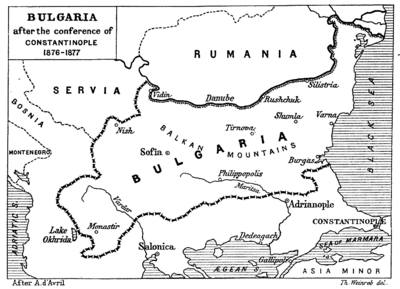 Bulgaria according to the Constantinople Conference

The Great Powers were represented at the conference respectively by:

Of these, Lord Salisbury, Count de Chaudordy and Baron von Calice were Ambassadors Plenipotentiary to the conference, while Count Ignatyev, Sir Henry Elliot, Count de Bourgoing, Baron von Werther, Count Zichy and Count Corti were the resident Ambassadors of their countries in Constantinople.

The US Consul General in Constantinople, Eugene Schuyler also took an active part in drafting the conference decisions.

The Ottoman Empire was represented at the conference by:

Mithat Pasha was the Grand Vizier (First Minister), and Saffet Pasha the Foreign Minister of Turkey. Although the Turkish representatives participated in the plenaries of the conference, they were not invited to the preceding working sessions at which the Great Powers negotiated their agreement.

Lord Salisbury and Count Ignatyev played a leading role in the process. Ignatyev was trying to dispel British misgivings about Russia’s assumed role of a protector of the Orthodox Slavs being but a disguise of its drive to take over the Bosporus and Constantinople itself and thus – as Prime Minister Disraeli feared – potentially threaten the vital Mediterranean routes to British India. On his part, Salisbury saw the conference as a promising opportunity for mapping out a comprehensive deal with Russia over their conflicting territorial ambitions in Central Asia.

The conference envisaged the creation of an autonomous province including Bosnia and most of Herzegovina, while a southern part of the latter was to be ceded to Montenegro.

The conference determined that, as of the late 19th century, the Bulgarian ethnic territories within the Ottoman Empire extended to the Danube Delta in the northeast, Kastoria in the southwest, Kirklareli and Edirne in the southeast, and Niš in the northwest. These territories were to be incorporated into the two Bulgarian autonomous provinces as follows:

The agreed decisions of the six Great Powers were formally handed over to the Ottoman Government on 23 December 1876, dismissing the opening Turkish suggestions that the Conference's mission might have been obviated by a new Ottoman Constitution approved by Sultan Abdul Hamid II that same day. In the subsequent conference plenary sessions Turkey submitted objections and alternative reform proposals that were rejected by the Great Powers, and attempts to bridge the gap did not succeed. Eventually, on 18 January 1877 Grand Vizier Mithat Pasha announced the definitive refusal of Turkey to accept the conference decisions.

The failure of the Ottoman Government to implement the decisions of the Constantinople Conference triggered the 1877–1878 Russo-Turkish War, depriving at the same time Turkey – in contrast to the preceding 1853–1856 Crimean War – from Western support.

Tsarigrad Peak in Imeon Range on Smith Island in the South Shetland Islands, Antarctica is named after the conference (‘Tsarigrad’ being the old Bulgarian name for Constantinople).

All content from Kiddle encyclopedia articles (including the article images and facts) can be freely used under Attribution-ShareAlike license, unless stated otherwise. Cite this article:
Constantinople Conference Facts for Kids. Kiddle Encyclopedia.