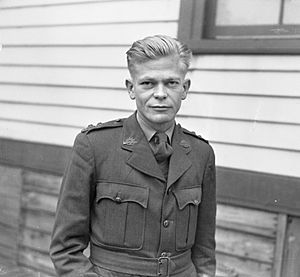 James Phillip McAuley (12 October 1917 – 15 October 1976) was an Australian academic, poet, journalist, literary critic and a prominent convert to Roman Catholicism who also composed hymns. McAuley was born in Lakemba, a suburb of Sydney. He was educated at Fort Street High School and then attended Sydney University where he majored in English, Latin and philosophy. His first book of verse, Under Aldebaran, was published in 1946. He died of cancer in 1976, at the age of 59, in Hobart.

All content from Kiddle encyclopedia articles (including the article images and facts) can be freely used under Attribution-ShareAlike license, unless stated otherwise. Cite this article:
James McAuley Facts for Kids. Kiddle Encyclopedia.