Colonel James Skinner CB (1778 – 4 December 1841) was an Anglo-Indian military adventurer in India, who became known as Sikandar Sahib later in life, and is most known for two cavalry regiments he raised for the British, later known as 1st Skinner's Horse and 3rd Skinner's Horse (formerly 2nd Skinner's Horse) at Hansi in 1803, which still are a part of the Indian Army

He was a fluent writer in Persian, the court and intellectual language of India in his day, and wrote several books in Persian, including which are now with the Library of Congress. 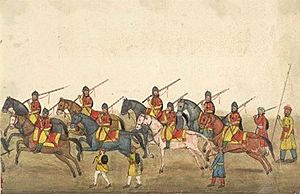 Skinner was born in 1778 in Calcutta (Kolkata) India. His father was Lieutenant-Colonel Hercules Skinner, an officer in the East India Company Army of Scottish origin, while his mother was a Rajput princess. He was first educated at an English school in Calcutta, and then at a boarding school. 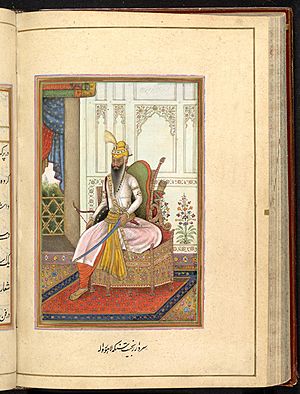 Portrait of Maharaja Ranjit Singh of the Punjab

His father originally apprenticed him to a printer in Calcutta but hating the life he ran away after three days. Because of his Indian heritage, Skinner was unable to serve as an officer in the East India Company army and, at the age of sixteen, he entered the Mahratta army as an ensign. Once taken in, Skinner soon showed military talent. He remained in the same service until 1803, when, on the outbreak of the second Anglo-Maratha War, all Anglo-Indians were dismissed from Mahratta service.

Eventually he joined the Bengal Army. Subsequently, on 23 February 1803, Skinner raised a regiment of cavalry called "Skinner's Horse" or the "Yellow Boys" because of the colour of their uniform. Later it became a famous regiment of light cavalry in the British Indian Army and still exists today as part of the Indian Army.

In 1828, James was finally given the rank of lieutenant-colonel in the British service. Later James became a colonel on 26 December 1826.

He had an intimate knowledge of the characters of the people of India, and his advice was highly valued by successive governor-generals and commanders-in-chief. Additionally, Skinner wrote a volume of memoirs in Persian of his military expeditions.

Skinner died on 4 December 1841, at the age of 64. He was first buried in the Cantonment Burial Ground at Hansi and after a period of 40 days was removed and his coffin brought to Delhi, escorted by 200 men of Skinner's Horse. He was then buried in Skinner's Church on 19 January 1842 in a vault of white marble immediately below the Communion table .

All content from Kiddle encyclopedia articles (including the article images and facts) can be freely used under Attribution-ShareAlike license, unless stated otherwise. Cite this article:
James Skinner (soldier) Facts for Kids. Kiddle Encyclopedia.