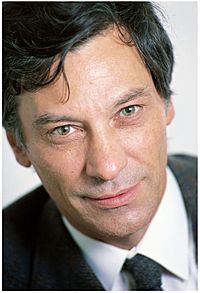 He was born in Leuven. On 17 June 2012, he collapsed at the airport in Hamburg, Germany after having a heart attack. On 23 June 2012, Hoet suffered from hypercapnia and he was being held in a coma at the hospital of Soltau, Germany. He soon returned to Ghent.

All content from Kiddle encyclopedia articles (including the article images and facts) can be freely used under Attribution-ShareAlike license, unless stated otherwise. Cite this article:
Jan Hoet Facts for Kids. Kiddle Encyclopedia.