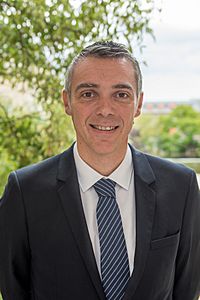 Jean-François Cesarini (30 September 1970 – 29 March 2020) was a French politician. He was a member of the La République En Marche! (LREM). He was elected to the French National Assembly on 18 June 2017, representing the department of Vaucluse. Cesarini was born in Avignon, France.

All content from Kiddle encyclopedia articles (including the article images and facts) can be freely used under Attribution-ShareAlike license, unless stated otherwise. Cite this article:
Jean-François Cesarini Facts for Kids. Kiddle Encyclopedia.