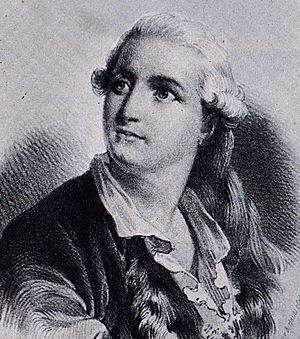 Lithograph of Jean Dauberval, Paris, circa 1790

Jean Dauberval, a.k.a. Jean D’Auberval, (born Jean Bercher in Montpellier, 19 August 1742 – Tours, 14 February 1806), was a French dancer and ballet master. He is most noted for creating the ballet, La fille mal gardée, one of the most enduring and popular works of the ballet repertoire.

Dauberval was trained at the school of the Paris Opéra where he studied under the great Jean-Georges Noverre. He was appointed premier danseur of the ballet of the Académie Royale de Musique in 1763, and, in 1771, he was named ballet master. From 1781 until 1783, he was engaged as Maître de Ballet to the Académie, and in 1783-84 season in London's King's Theatre.

In 1783, Dauberval moved to Bordeaux, where he accepted the post of maître de ballet to the Grand Théâtre de Bordeaux, a position he held until 1791. In 1789, Dauberval created his most enduring ballet, La Fille mal gardée, in which his wife, the dancer Marie-Madeleine Crespé, who is known to history as Madame Théodore, created the role of Lison. (The role is known as "Lise" today.)

All content from Kiddle encyclopedia articles (including the article images and facts) can be freely used under Attribution-ShareAlike license, unless stated otherwise. Cite this article:
Jean Dauberval Facts for Kids. Kiddle Encyclopedia.