Jean-Georges Noverre (29 April 1727 – 19 October 1810) was a French dancer and balletmaster, and is generally considered the creator of ballet d'action, a precursor of the narrative ballets of the 19th century. His birthday is now observed as International Dance Day.

His first professional appearances occurred as a youth in Paris at the Opéra-Comique, at Fontainebleau, in Berlin before Frederick II. In 1751, he composed his first great work, Les Fêtes Chinoises for Marseilles. The work was praised in Paris in 1754 to great acclaim. In 1755, he was invited by Garrick to London, where he remained for two years. 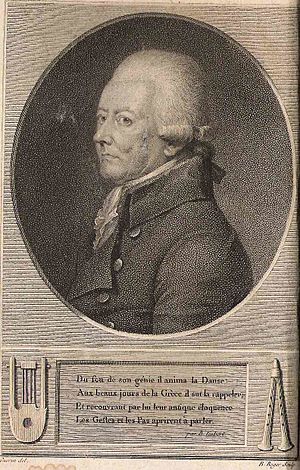 Between 1758 and 1760 he produced several ballets at Lyon, and published his Lettres sur la danse et les ballets. He was next engaged by Duke Karl Eugen of Württemberg, and later Austrian Empress Maria Theresa, until 1774.

In 1775, he was appointed maître des ballets of the Paris Opera at the request of Queen Marie Antoinette. He returned to Vienna in Spring of 1776 to stage ballets there but in June 1776 he returned again to Paris. He regained this post until the French Revolution reduced him to poverty. He died on October 19, 1810, at Saint-Germain-en-Laye.

Noverre's friends included Voltaire, Mozart, Frederick the Great and David Garrick (who called him "the Shakespeare of the dance").

All content from Kiddle encyclopedia articles (including the article images and facts) can be freely used under Attribution-ShareAlike license, unless stated otherwise. Cite this article:
Jean-Georges Noverre Facts for Kids. Kiddle Encyclopedia.