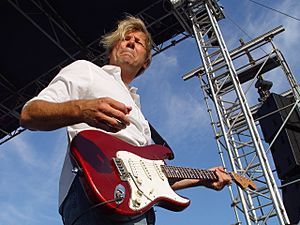 Golub was born in Copley, Ohio and raised in Akron. In June 2011, he became blind from optic nerve issues. In September 2012, he fell onto a train track in New York but was treated for his injuries.

All content from Kiddle encyclopedia articles (including the article images and facts) can be freely used under Attribution-ShareAlike license, unless stated otherwise. Cite this article:
Jeff Golub Facts for Kids. Kiddle Encyclopedia.