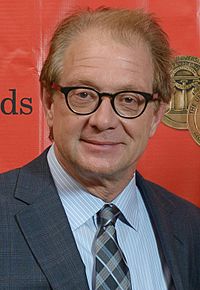 Perry at the Peabody Awards, May 2014

Jeffrey Perry (born August 16, 1955) is an American Drama Desk Award-winning actor. He stars in the ABC political drama Scandal as Cyrus Beene. He was born in Highland Park, Illinois and studied at Illinois State University. He began his career in Chicago. He was a tough superior to Kevin Bacon's detective in the thriller Wild Things (1998).

All content from Kiddle encyclopedia articles (including the article images and facts) can be freely used under Attribution-ShareAlike license, unless stated otherwise. Cite this article:
Jeff Perry Facts for Kids. Kiddle Encyclopedia.