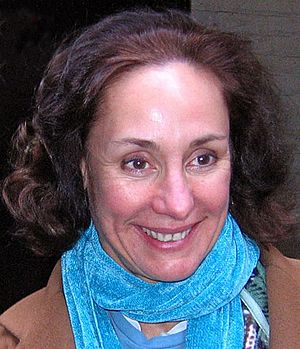 Lauren Elizabeth "Laurie" Metcalf (born June 16, 1955) is an American movie and television series actress. She played Jackie Harris in the sitcom Roseanne. She played Carolyn Bigsby in the sitcom Desperate Housewives She played Debbie Salt in Scream 2. She played one of the characters in the Toy Story franchise. Metcalf received three Emmy Awards for her performance. She was born in Carbondale, Illinois.

All content from Kiddle encyclopedia articles (including the article images and facts) can be freely used under Attribution-ShareAlike license, unless stated otherwise. Cite this article:
Laurie Metcalf Facts for Kids. Kiddle Encyclopedia.