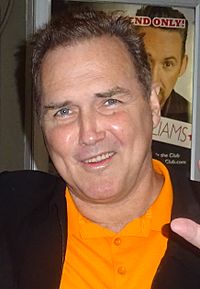 Norman Gene Macdonald (born October 17, 1959) is a Canadian stand-up comedian, writer and actor. He was a cast member for five seasons of Saturday Night Live from 1993 to 1998. He wrote for the sitcom Roseanne. He co-created and starred in The Norm Show (1999–2001) and A Minute with Stan Hooper (2003). He hosted the podcast Norm Macdonald Live from 2013 to 2018. He also appeared as Mitch Weaver in the movie Dirty Work and as Lucky in five Dr. Dolittle movies.

Macdonald was born in Quebec City, Quebec. He is divorced. He has a son, Dylan (born 1993).

All content from Kiddle encyclopedia articles (including the article images and facts) can be freely used under Attribution-ShareAlike license, unless stated otherwise. Cite this article:
Norm Macdonald Facts for Kids. Kiddle Encyclopedia.