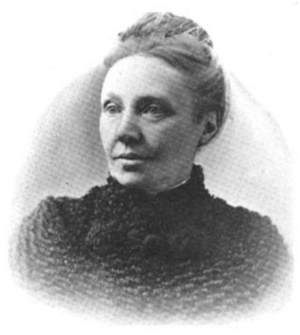 Jennie Maria Drinkwater Conklin (pen name, Jennie Maria Drinkwater; April 14, 1841 – April 28, 1900) was an American author and social activist. While still in her teens, she won fame with her stories for children. She wrote books for girls as well as for the religious press. Conklin was the originator of the organization known as the Shut-In Society, which was a bureau of correspondence for disabled women and girls.

Jennie Maria Drinkwater was born in Portland, Maine, April 14, 1841. Her father was Levi Drinkwater, a retired sea captain. She was educated in the public schools there and at the Institution for Young Ladies on Brooklyn Heights, also known as the Greenleaf Female Institute.

Drinkwater began writing as a child, and was a constant contributor to leading papers. Always fond of reading, at the age of 12, she became inspired with the thought of writing a book herself. At odd moments, she made her first attempt at story-writing, story-telling she had begun before, gathering about her the younger children to listen to the adventures of some small heroine. Her earliest recollection of books were the Bible and The Pilgrim's Progress. Later, she looked back and saw how the thread of those early influences wove her stories. Having had from her earliest reading an absorbing interest in biography, one of her first inspirations in bookmaking was the thought of biography -- to write lives of people as she found them, using their weaknesses, hardships, evil or noble conduct to point truth to others. For this reason, Conklin's stories always possessed a moral as well as an absorbing interest.

In 1874, when she was disabled, she became interested in girls and women shut in from the outside world, and the thought of a society for mutual comfort occurred to her. She sought other disabled women in similar circumstances, and wrote an account of her Shut-In Society. By 1896, the Shut-In Society had more than 2,000 members, with members in every state, and in many other parts of the world. It was an organized society, with an advisory board, and it published month a magazine call the Open Window. Her book, Tessa Wadsworth's Discipline, gives a sketch of its earliest members.

Under her maiden name, she wrote a number of books, among the better known being Tessa Wadsworth's Discipline, Bek's First Corner, Marigold, Dolly French's Household, Miss Prudence, and Fifteen. Other popular books included Other Folk, Rue's Helps, The Story of Hannah, Isabel's Between Times, Rizpah's Heritage, From Flax to Linen, Three Women, Three and Twenty, Paul French's Way, Electa, Uncle Justice Seth's Will, The Fairfax Girls, Second Best, Set Free, Fourfold, Marigold, Other Folk, Miss Prudence Cromwell, The Story of Hannah, Looking Seaward, Dorothy's Islands, Goldenrod Farm, Shar Burbank. Her books have been financially successful; several editions of 30,000 each have been sold. Her books were classified as "Sunday-school Juveniles" for the young, but more especially for girls.

She married Rev. Nathaniel Conklin, March 17, 1880. He was for many years pastor of the Presbyterian Church of New Vernon, New Jersey. He died in 1892. Since her husband's death, she resided in Newark, New Jersey. She died in New Vernon, April 28, 1900. Internment was made in Hillside Cemetery.

All content from Kiddle encyclopedia articles (including the article images and facts) can be freely used under Attribution-ShareAlike license, unless stated otherwise. Cite this article:
Jennie Maria Drinkwater Conklin Facts for Kids. Kiddle Encyclopedia.