Forbes magazine ranked New Vernon, New Jersey — ZIP code 07976 — as one of the 25 most "expensive" zip codes in the country.

People who were born in, residents of, or otherwise closely associated with New Vernon include: 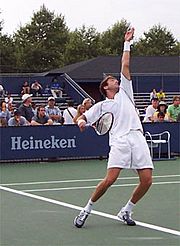 All content from Kiddle encyclopedia articles (including the article images and facts) can be freely used under Attribution-ShareAlike license, unless stated otherwise. Cite this article:
New Vernon, New Jersey Facts for Kids. Kiddle Encyclopedia.