Geraldine "Jerrie" Fredritz Mock was born in Newark, Ohio. During her childhood, she found that she had more in common with the boys. Her interest for flying was sparked when she was 7 years old when she and her father had the opportunity to fly in the cockpit of a Ford Trimotor airplane. In high school, she took an engineering course of which she was the only girl and decided flying was her passion. She graduated from Newark High School in 1943 and went on to attend Ohio State University. She would leave her studies at OSU behind to wed her husband, Russell Mock in 1945. 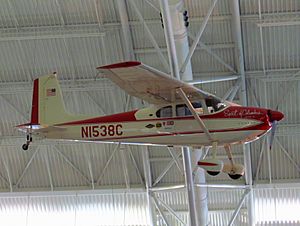 A life-size bronze sculpture of Mock was unveiled in the courtyard of The Works museum in Newark, Ohio on September 14, 2013.

Mock’s Cessna 180 which she flew around the world, “The Spirit of Columbus,” hangs in the Udvar-Hazy Center of the National Air and Space Museum in Virginia. In June 2007, Mock flew to Chantilly, Virginia, to see “The Spirit of Columbus” for the first time in many years. Mock "was so pleased to see her plane 'airborne' again".

The United States Air Force named a street in honor of Mock at Rickenbacker AFB (presently Rickenbacker Air National Guard Base and Rickenbacker International Airport) in Lockbourne, Ohio (near Columbus).

A plaque bearing Mock's accomplishments can be found in the Tallahassee Regional Airport's Aviation Wall of Fame in Tallahassee, Florida.

All content from Kiddle encyclopedia articles (including the article images and facts) can be freely used under Attribution-ShareAlike license, unless stated otherwise. Cite this article:
Jerrie Mock Facts for Kids. Kiddle Encyclopedia.